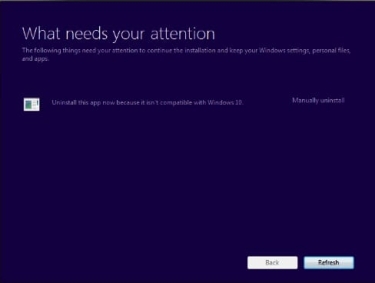 If your efforts to upgrade to Windows 10 are being thwarted by a message telling you to manually uninstall software that's already been uninstalled, this might be the solution you're looking for.

I still use an old Toshiba NB300 netbook when I attend conferences and other events. I get some strange looks – shouldn't a tech journalist be using the latest gear? – but it has a much better keyboard than any current notebook I've tried. That keyboard was the reason for buying the NB300 rather than any of its competitors.

Over the years I've maxed out the RAM (to a whole 2GB!) and replaced the hard drive with an SSD, which have kept the performance at an adequate level.

I didn't rush to upgrade it to Windows 10, but each time Windows Update tried to install the new OS it failed with an "unknown error."

With Windows 7 going out of support, I decided to make a concerted effort to upgrade to Windows 10, and if that failed, I'd install Linux instead.

Since Windows Update hadn't been able to do the job, I followed one of the many sets of instructions that are kicking around the web. I'm not going to mention which one, because they're all pretty much the same and none that I found addressed the problem I ran into.

But first, a tip: if you use Microsoft's Media Creation Tool and its "Upgrade this PC now" function, be aware that several gigabytes of data are downloaded <I>each time you run it</I>. I made at least four failed attempts to upgrade in this way, and that had a significant impact on my limited download quota for the month – especially as it coincided with a free trial of Amazon Prime.

So for the next attempt, I downloaded the Windows 10 ISO and created a bootable USB drive. That second step wasn't really necessary, as you have to boot from the Windows 7 system that you want to upgrade.

Anyway, back to the real problem. The Windows 10 upgrade process includes a check for incompatible software. That makes sense, but in this case it was objecting to an old version of Trend Micro Internet Security that had been uninstalled years ago. The upgrade recommended manual uninstallation without offering any further advice. Clearly some fragment of that package remained on the drive, but what was it, and where was it hiding?

The obvious (at least to me) move was to find, download and run Trend Micro's uninstaller, but that didn't solve the problem. It turned out to be a fairly widespread problem, and further searching turned up Trend's Diagnostic Toolkit and also its Old TM Remover, but neither of them cleaned up the item that was blocking the Windows 10 installation.

I also searched the Registry for obvious references to Trend Micro software. There were a few, but deleting them didn't make any difference.

Then it occurred to me that the Windows installer was probably creating a log file that would identify the problematic file.

A change of search terms soon turned up a reply to a related question on answers.microsoft.com in which Edison Pus (then a Microsoft agent) explained how to locate the log file, and then how to find the path(s) to the item(s) blocking the installation so you can delete them.

Note that this approach isn't specific to Trend Micro software that's incompatible with Windows 10. It should work whenever something on your computer is on the Windows 10 installer's blacklist.

A while later I had a functioning Windows 10 installation on the NB300.

The trouble was it was slow. Very slow.

Task Manager showed 99% CPU utilisation, and that's not good, especially when you're talking about a decade-old Intel Atom system.

The main culprit was the Intel Rapid Storage Technology Driver (IAStorDataSvc). My first thought was that it had a lot of work to do as so many files were changed by the upgrade, so I left the NB300 running for a couple of days.

No dice: Intel Rapid Storage Technology Driver was still consuming around half of my CPU cycles. Further research showed I wasn't the first person to encounter the problem, but suggested fixes either didn't work or were unavailable to me. Toggling the AHCI setting in the BIOS resulted in an unbootable system (which wasn't a complete surprise), updating the BIOS sounded like a good idea but Toshiba/Dynabook warns that BIOS updates are hardware specific but don't seem to say which versions work with this computer, and Intel counsels against using the Intel Rapid Storage Technology Driver versions on its site as opposed to those available from the relevant hardware vendor.

So I disabled the associated service, and now the system idles at around 4% CPU, leaving almost all of its limited grunt for real work. In my case, that's using LibreOffice to write articles, IrfanView to crop and resize photos, and Firefox to file the finished work.

I realise none of this is newsworthy or particularly notable. I'm telling the story in the hope of making those instructions for interpreting the Windows 10 installer log more visible to anyone else who sees the message about manually uninstalling incompatible software, especially when they know it has already been uninstalled.

More in this category: « 'You've got to give the people what they want' Foxtel stops customers cancelling »
Share News tips for the iTWire Journalists? Your tip will be anonymous