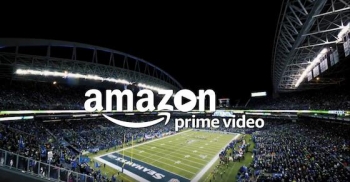 There's no indication that live NFL matches are a drawcard for Amazon Prime Video in Australia.

However, the average audience was only 372,000, with an average viewing duration of 55 minutes.

And that's the problem with Amazon's NFL coverage: the stop-start nature of this football code means matches run for more than three hours, so you really need to watch on-demand so you can fast-forward through the interminable breaks. But Amazon only offers live streams.

Another issue for Australian audiences is that matches are shown in the middle of the day: this week's match — New England Patriots v Tampa Bay Buccaneers — kicks off at 11.25am AEDT on 6 October. At least that means interested subscribers could catch that average 55 minutes during their lunch hour.

It's probably telling that outside the US, last week's match was most watched in Mexico, which is in the same time zone as the central US.

Germany provided the third biggest audience. More than 34,000 members of the US military are based in Germany, more than any other country outside the US apart from Japan.

Amazon did not break down the audience numbers apart from identifying the top three markets.

The Isle of Man (a self-administering Crown dependency in the Irish Sea between the UK and Ireland) has a population of around 84,000.

So that leaves us wondering how many people watched the game in Australia via Prime Video. Amazon wouldn't tell us, so even though ESPN's coverage of certain matches (mostly Super Bowls) have reportedly attracted audiences of more than 100,000 proving there is interest in the sport, we suspect the answer is "hardly anyone".

It wouldn't be the first time that streaming overseas sport into Australia has flopped. Optus spent big (reportedly $189 million) to secure the rights to English Premier League football (soccer) without winning many friends. Since Optus hasn't been trumpeting figures showing the strategy was successful, we can only assume it wasn't.

More in this category: « NBN Co drops tiers, talks speed without mentioning speeds NBN – it's not all bad news »
Share News tips for the iTWire Journalists? Your tip will be anonymous