0
Shares
By Stephen Withers
An estimated 300 people queued for the opening of the Doncaster Apple Store this morning, despite it being the fifth in Australia and the second in suburban Melbourne.

Located in an upmarket area of the recently renovated Westfield Doncaster shopping centre, the store is roughly twice the size of the Robina Apple Store that opened earlier this month. 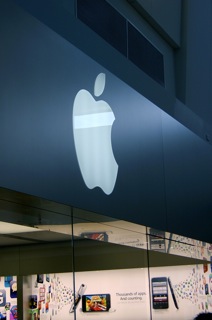 It is also slightly larger than the Chadstone store, and several of the 50 or so Doncaster staff - including the store manager and the head genius - previously worked at Chadstone.

Customers began queuing at 8pm on Friday night, and by 8am around 100 were waiting for the new store to open.

Near the front of the line was the first customer of the Sydney Apple Store, which opened last year.

The store itself follows Apple's usual arrangement, with large tables allowing customers to try before they buy.

The company runs free workshops ranging from basic Mac use to more advanced topics. Customers can purchase an annual one-on-one training pass for $A129, which entitles them to one session per week on any of 75 topics.

There's more about the opening (plus more photos) on page 2.

This has been "hugely successful with our customers," said store manager 'Simone'.

Children as young as seven have received one-on-one training at Chadstone, she added. 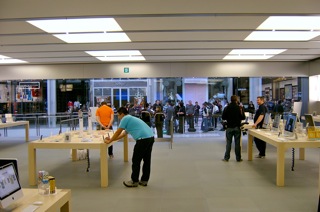 Half of the Macs sold in Apple Stores go to first-time buyers.

According to an Apple spokesperson, 664,000 of these sessions have been run  in Apple Store around the world during the first three months of 2009. An impressive number, but one that pales by comparison with the 39.1 million visits at the stores during the same period. 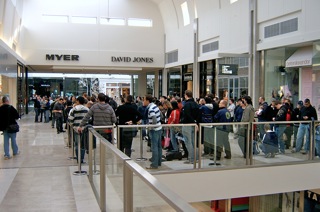 Doncaster is the 255th Apple Store, and the fifth in Australia.

You can't help wondering how many other retailers could attract several hundred people to a store opening (with no special incentives other than a t-shirt for the first customers), let alone persuade half a dozen media representatives to show up at 8am on a Saturday.

Neighbouring retailers couldn't understand what the fuss was about.

More in this category: « Eucalyptus gets past App Store wowsers Wikimedia adopts Creative Commons »
Share News tips for the iTWire Journalists? Your tip will be anonymous