There have been many attempts by a variety of manufacturers to hit the all-in-one media computer sweet-spot, but none have come close, until now.

The Toshiba DX1210 is an excellent computer and multi-media device for a small home or studio apartment, albeit with a few shortcomings / limitations.

Offering an Intel Core i5 processor at 2.3GHz with 6GB RAM, a 1TB hard drive and Windows 7 Home Premium edition, this 21.5 inch touch-screen PC (with wireless keyboard and mouse) would be an attractive prospect even without the built-in media PC components.  The fact that all of the 'PC' components are embedded in the back of the monitor makes this a very stylish unit.

On the media side of things, there's a Blu-Ray player (which also does service as a dual-layer DVD burner) and a fully-integrated Analog/Digital TV tuner.  Of course there's also the expected webcam and microphone for the all-important skype video calls.

The DX1210 is provided with a full-featured remote control (just like any media player) which operates the device when in media mode.

Enough of the features; how is it in actual usage? 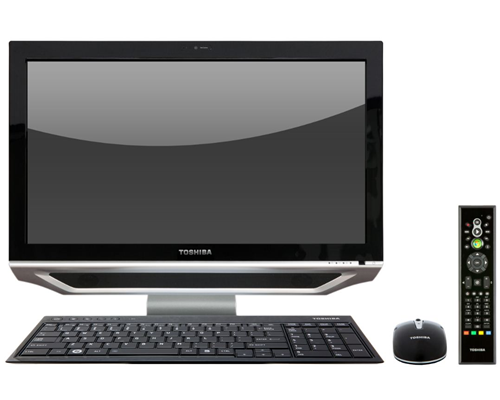 Once I received and configured the unit, I simply set it up in an open area of the house, booted it up and waited to see how it might be used.

Of course my primary school-aged son found the internet-based games that came with the free Windows 7 trial, and soon exhausted the supply of digital coins!

Also, my pre-school daughter easily opened Internet Explorer and logged on to Club Penguin (leaving my son to continue using Mini Clip on their shared computer).

Neither child realised that it was also a touch-screen!

One of us picked up the remote control and hit the green Windows button... lo and behold - it was suddenly a media unit.

We quickly connected a TV aerial cable and tuned in all channels; we also played a movie or two.  The sound was great (through the bottom-mounted Onkyo speakers) and the images clear without any obvious lag or ghosting.

Like many new computers, the Toshiba All-In-One supports charging of external devices (phones, music players etc) via one of the USB ports and has an amusing add-on in the virtual corkboard for on-screen 'post it notes.'

So, what are the issues?  Would we recommend this computer?

Before making a recommendation, let me spell out some of the negatives (I think the positives have already has sufficient airing).

1. The screen is too small.  Unless you're within a few feet of the unit when watching a movie, you'll lose a lot of the impact.

2. I'm dubious about the matching of a touch-screen computer with what is also intended to be a TV unit.  Who wants fingerprints appearing all over the latest new-release?

3. As other reviewers have also noted, the touch input and the wireless mouse are amazingly sensitive and can't easily be dialled back to a more reasonable setting.

4. (this is more of a complaint about the promotion of the product) I couldn't believe that Toshiba's marketing team would fall back on the hoary old gem of using the computer in the kitchen to manage recipes.  This thought has occupied the collective psyche of computer marketers looking for a reason to put a computer in the home for as long as this reporter has worked in the computer business (considerably more than 20 years).  It is no more true now than it was 20 years ago!

In case you're wondering, from the press release: "Parents can look up recipes while preparing dinner or it can be used for catching up with friends on Facebook."

5. While it was very easy to switch the machine from PC mode to media mode (just push the big green Windows button on the remote, or use the installable desktop gadget), one would have hoped that the same button on the remote would have returned control to the PC mode, but alas no.  Instead one was forced to navigate through the menu system to find the 'exit' command to terminate the media mode.

Would we recommend the Toshiba DX1210 All-In-One PC?

Overall, the Toshiba DX1210 All-In-One PC is presented with a (slightly) guarded 'yes.'

For those people looking for a single unit to fill the roles of both home PC and Entertainment Unit, this fits the bill perfectly; but only in the smallest of apartments.  For a high school student wanting a single unit for their bedroom, this is perfect.  Once studies are done, the entertainment may begin.

Also, as a second (or third) media source, which also acts as an alternate computer in the house, again a 'yes.'  However, in any larger dwelling this could never be a primary entertainment device.

The Toshiba All-In-One DX1210 PC is available from a variety of retailers in black for a recommended retail price of $1,899 and exclusively from Harvey Norman in white (do we detect an attempt at a Mac clone here?), for the same price. 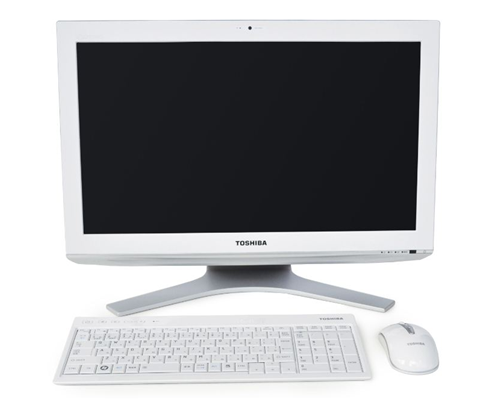 More in this category: Review: Samsung Q9 2018 QLED TV – Best LCD Smart TV ever? »
Share News tips for the iTWire Journalists? Your tip will be anonymous