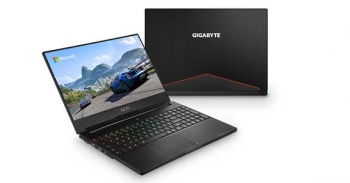 Gigabyte's Aero 15 has been impressing the world for some time now. It's a noteable notebook in that it's a relatively thin, portable machine that is designed to fit into an executive office while simultaneously being able to play the latest games.

Because this product line refresh is all about performance, we'll start with that.

The new, Core i7-8750H processor has six cores (12 threads) and a stock clock speed of 2.2GHz. One of these cores has Turbo Boost to 4.2GHz while all six can accelerate to 3.9GHz if required (full processor specs can be read here). It uses Intel's Coffee Lake H architecture which is based upon Intel's mature (3rd generation) 14nm fabrication process. Intel says that this design can offer "26% more performance for 52% less power." More about this Kaby Lake successor can be read, here but the upshot is that these new chips have two extra cores and are capable of higher clock speeds thanks to enhanced binning processes. Otherwise there's little difference between it and the older Skylake architecture.

Back in the real world, the processor is flanked by 16G GB of speedy DDR4-2666 RAM and a 512GB NvME drive. These flew to a PCMark 10 score of 4,950 which Futuremark places in top, 4K desktop gaming rig territory. That's quite something for a 15-inch highly-portable notebook.

But to really see what 6 cores and 12 threads could accomplish, we ran the Cinebench R15 3D rendering test which makes full use of a processor's power. Here it scored 1140 which is the performance we'd expense from a very hefty home desktop PC. For mobile workers who need processing power, this makes a great choice.

Of course, this laptop isn't just about 2D performance, the mighty, Nvidia GTX 1070 chip means it can play the latest games. In 3DMark TimeSpy it scored 4,507 which equates to an average of around 30fps. It also scored 12,960 in FireStrike (around 70fps average). When coupled with the 144Hz, Full-HD screen, everything that we threw at it looked smooth. It's a great gaming notebook and that's comparing it with the much-larger, bread-basket, fan-filled monster competitors on the market. 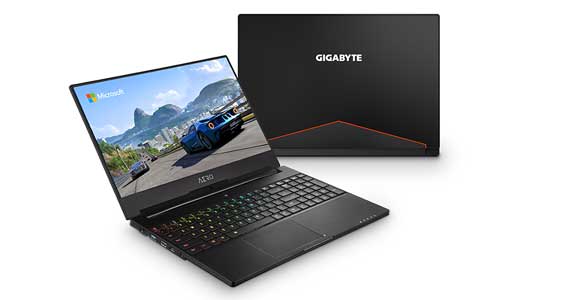 The Aero 15 has a 15.6-inch screen but because the bezel is so thin, it consumes the footprint of a typical- 14-inch rival. It looks the part for the office and we're impressed with the Gigabyte logo which is silver when off but glows when on. However, we do wonder whether the company should use a separate brand for its outside-Taiwan markets. Top, Western executives don't regard Gigabyte as having the same C-Suite cachet that Taiwan's equivalents do.

It feels sturdy and very well-built but the screen does wobble on its hinges when knocked. We also have issues with the webcam which sits below the screen – it's there in order to keep the bezel thin – but this is a very unflattering angle for most people. However, it was reasonable in low-light and useable otherwise.

The keys have a nice action to them and feel both comfortable for typing and gaming. There's also a full number pad and arrow keys but we do feel it's gone a bit too far. By squeezing so many full-sized keys on to the right-hand side of the keyboard, the primary lettering has all been shifted over to the left. As such only O, P and L lie to the right of the laptop's centre line so you'll need to reach across more with your right arm. If you're a desk worker and don't move much in the first place, this can cause muscular aches. The trackpad is a standard affair and we had no issues with it.

The screen, however, is a joy to look at. The new range has 144Hz refresh rates which makes gaming look and feel noticeably smoother and a smidge more accurate in fast-paced games like First Person Shooters.

It's an IPS panel so colours look very vibrant while viewing angles are just enough to maintain quality when sharing what's on your screen with colleagues without allowing for side-glancing eavesdroppers. It's also Pantone certified which will please designers who need accurate, real-world colour comparisons. A 4K version will also be made available.

A potential issue is inherent in a device that packs powerful components into a relatively-small chassis: it can get very hot and the fans will ramp up and get loud very quickly. Unless you're simply typing or watching a movie, you'll be unlikely able to keep it on your lap – this would cover the air-vent grilles for one thing. We torture-tested it with some cryptocurrency mining overnight and the processor hit 86 degrees Celsius while the GPU spiked at 72 degrees. These are high numbers but not as high as other gaming laptops which can regularly reach 80-90 degrees with much-larger, larger-fan-filled chassis. Nonetheless, at these points, the internal fans emitted a loud, high-pitched whine, but unless you plan on using it for cryptocurrency mining 24/7 you should only hear these noises when playing particularly-processor heavy game sequences or encoding.

On the left are a wired Ethernet port, HDMI, mini Display, 3.1mm audio jack and a USB 3.1. On the right are two USSB ports plus a USB-C.

It's tricky to run accurate reflective tests with laptops like this as power will fluctuate considerably according to internal and ambient temperatures. Gigabyte also throws in a wild card in that no matter what we did, it runs PCMark 8's Battery Test in a low power mode to stretch out the battery score while at the same time slashing performance – rendering it a pointless test.

However, in power saving mode and with Flight Mode enabled, plus with earbuds attached and a screen set to a medium brightness, it did play our test 1080p movie for a whopping 7hrs 45mins. Its predecessor managed six hours ten minutes, That's excellent for both an ultraportable and amazing for a game-playing behemoth.

There's heaps to love about the Aero 15X. It does pretty much everything brilliantly. The only thing stopping it being our laptop dream machine is the keyboard because it literally puts our back out – that's a big deal.

As a showcase for Intel's new mobile chip, though... it's excellent. Performance-wise, this is a step up from everything that has come before it in this space and for it to appear in a machine as thin and portable as this is borderline stunning. At $3299 you'll certainly pay for it, but to people who don't want to separate their work machine from their gaming machine, it could represent excellent value. But do check out Asus' updated Zephyrus before you commit to buying.

More in this category: « REVIEW: Fujitsu's U937 ultralight touch notebook is a winner Review: HP’s Elitebook x360 1020 G2 – a smooth business Windows 10 convertible »
back to top