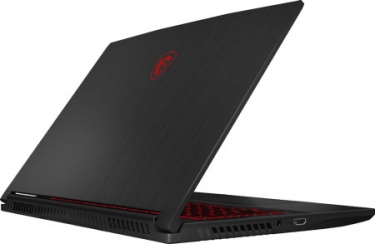 MSI makes a laptop for everyone, with multiple SKUs available for each shape and size. This model does everything for everyone.

The latest 15.6-inch GF65 Thin is just 21mm thick and weighs 1.86KG and yet the technology is packed in with Intel’s 9th Gen processor and Nvidia’s RTX 2060 graphics. It looks sober-yet-slick enough for a boardroom but won’t look out of place at a gaming LAN thanks to its black chassis with red accents.

It’s well-built nonetheless and flexes little no matter how you pick it up (noticeably less so than its predecessor). The lid is thin but sturdy and doesn’t flex much either. It’s described as brushed Aluminium in terms of styling but it’s actually all plastic, so it doesn’t feel particularly high quality. But that’s the sacrifice for the weight and price.

The lid protects a 15.6-inch, Full HD, 144Hz, LCD screen which is sharp and bright albeit with slightly muted colours. Other variants are expected to include 4K resolutions.

The low-travel, Scrabble-tile keyboard is very comfortable to use. It doesn’t feel cramped and it stretches across the full chassis (albeit with no keypad). There are also, we’re pleased to report, full-sized arrow keys. The red backlighting captures the perfect balance between stylish, subdued, ostentatious and useful. Meanwhile the large trackpad is well positioned and very usable.

Connectivity includes only HDMI on the left but four USB 3.2 Gen1 connectors on the right (two Type-A and two Type-C). There’s also Gigabit Ethernet and a 3.5mm audio jack. A bit more spacing between them would be nice: if you’re using all of them at once it’s likely some of the fatter connectors will impede the others.

The GF65 thin uses Intel’s excellent, 9th Gen, hexa-core, 2.6GHz i7-9750H processor which can boost up to 4.5GHz. While we’re disappointed not to see a 10th Gen processor, this model is no slouch and has always impressed us. It’s disappointingly flanked by just 8GB (single channel) RAM but this is made up for with a fast, 512GB NVMe PCIe drive (with space for a second one). These combined to push the system to score an impressive 5,208 in PCMark 10 which, Futuremark tells us, is better than two-thirds of its submitted results and typical of a computer that’s faster than other gaming laptops but slower than a desktop gaming PC: very good for such a compact device.

The Nvidia RTX 2060 graphics scored 3,363 in the very difficult, ray-tracing enabled, Port Royal 3D gaming test, which puts it at the top of Futuremark’s gaming laptops bracket. It also scored a decent 7,217 in Fire Strike Extreme and 5,835 in Time Spy. In CineBench R15 it scored a decent 1,108.

It should be noted that these results all used the GF65’s top performance settings which are accessible in MSI’s Dragon Center app. This will automatically push performance when you need to (at the expense of fan noise) or dial it down (when you need it to be quiet). At its quietest you can hear a mild whooshing sound in a quiet room. But when it’s ramped up, it’s not particularly quiet – although it’s nowhere near as bad as some, larger gaming laptops.

The two, 2W, built-in speakers aren’t particularly loud or well-rounded but they’re not totally tinny and don’t completely lack bass. A respectable Full HD webcam sits in the top of the lid. But, we’re a little disappointed to see AC Wi-Fi included – Wi-Fi 6 can achieve significantly better range and performance. The battery should last several hours but won’t get through a full-day as with other ultra-portables.

At only 1.86KG it’s impressively light for the performance and features that it packs in. While there are alternatives on the market, with better screens and more-powerful innards, this GF65 thin seems to compromise in all the right places for the casual, all-rounder user. The trouble is, with the fluctuating dollar, MSI still hasn’t been able to confirm the price of this or other SKUs in Australia. All it can say is that the range will start from an affordable $1,579 – but that pricepoint will likely offer a significantly lower spec. We’ll revisit this preview with a full review once we understand the true value proposition. But it’s looking promising.