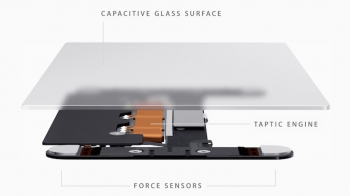 Apple has forcefully asserted its dominance in the trackpad space by introducing Force Touch capabilities, letting you get a better feel for touching Mac interactions.

No-one is forcing you to buy a new Mac equipped with a Force Touch trackpad, and even if you do buy one, you’re not forced to use it - you can turn Force Touch off, use a mouse or Apple’s non-Force Touch wireless trackpad.

But without Force Touch on, you won’t be able to feel the ‘click’ of a Force Touch interaction, which uses four of Apple’s own haptic feedback devices, dubbed ‘Taptic Engines’, to get a startlingly accurate click sensation, along with the ability to press harder to feel a second, stronger click.

Once the Mac is powered up, the Taptic Engines are engaged and the click sensation is remarkable - it really does feel like you’ve clicked the trackpad, and it even feels better than a click on a standard non-Force Touch surface.

That’s because non-Force Touch trackpads use the ‘diving board’ method of letting you click - the top part of a regular trackpad closest to the spacebar is much harder to click than anywhere else, and it’s easiest to tap from the middle to the bottom of a regular trackpad.

On a Force Touch trackpad, you can click anywhere and you’ll feel the click, because there is no diving board effect.

Better still than just a new way to deliver the feel of a click is the ability to press a little harder and feel a stronger second click.

If you do this on words in Safari, for example, you’ll get the same dictionary definition screen you do when clicking of tapping with three fingers on a regular trackpad.

Perform this second click on a link in Safari, and a preview of the page it links to pops up the way ‘Quick Preview’ works.

You can see the pressure sensitivity at work in these instances, where you press once gently to feel the first click and then subtly press harder without activating the second harder click and you’ll see a small window appearing and shrinking, preparing to show you the dictionary or website preview.

It’s a subtle thing - press too hard and you’ll activate the second click which brings up whatever that second click is designed to show, but it’s a fun little trick showing you the pressure sensitivity at work.

Use it in Quicktime with .MOV or .MP4 files on the ‘fast forward’ button and you can speed up or slow down the rate the video fast forwards at, and the same happens with the reverse button.

If you’re in Messages and there’s a date mentioned for an event, like a dinner or a meeting, you can use Force Touch to bring up the built-in Apple Calendar so you can quickly add the date and time in without needing to open the calendar up first and do it there.

You can also bring up a PDF file and when you choose the option in the ‘toolbox’ icon to sign your name, you can see the line getting thicker when you press harder - a clear indication of pressure sensitivity at work.

It’s also supposed to work in Apple Mail to bring up a map location for a friend in your contacts where you’ve added the address details, but as I use Gmail in the browser and don’t download mail to a mail client, I didn’t test it there.

You don’t have Force Touch on the 15-inch MacBook Pro as yet, nor it is available on the MacBook Air, while the separate Bluetooth trackpad doesn’t have it yet either.

Force Touch is also on the Apple Watch, although it appears to work slightly differently in that a harder press brings up additional options, as opposed to a click and a harder click, but I’ll be able to confirm this when I get to test out an Apple Watch.

There’s also now plenty of talk that the next iPhone 6S and 6S Plus, along with a future iPad Air 4 and iPad Mini 4 will come equipped later this year with Force Touch, too, although that’s purely speculation as Apple has naturally not confirmed any of those details as yet and won’t do it until those products actually launch. 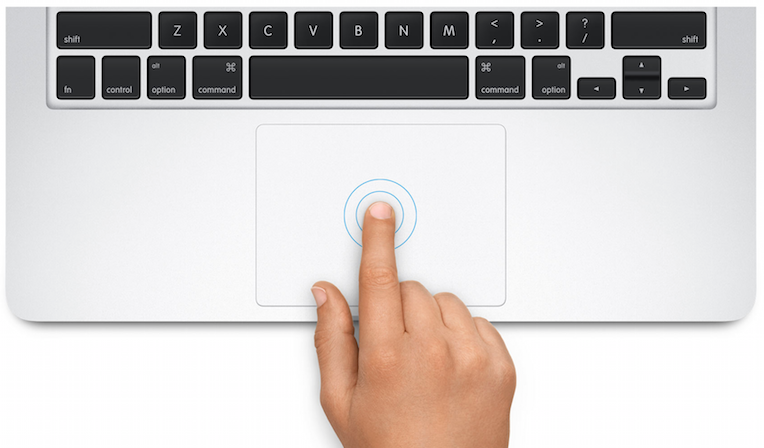 Of course, many people don’t actually click very often on their trackpads, whether they’re using Force Touch trackpads or not. I use tap to click and have for years, first on Windows notebooks, and since 2011, on Macs - but there are times when you need to click, and when you do, it feels totally natural.

Force Touch also doesn’t work everywhere - yet. I use the Safari browser because it gives much better battery life on Macs than Firefox or Google Chrome, but if I need to use Firefox or Chrome for whatever reason, Force Touch to look up a word’s definition or to see a preview doesn’t work.

That’s the same on non-Force Touch trackpads, too - you can’t use three fingers in Chrome or Firefox to look up the definition of a word, and it really reflects poorly on the makers of other programs that they don’t respect Apple’s conventions.

Actually this is slightly unfair to Google’s Chrome, which does now, finally, allow you to zoom into and out of a page using the trackpad - Force Touch or otherwise - but Firefox still doesn’t.

Force Touch is a genuine new advance to the humble trackpad, something that Apple has perfected a long time ago while trackpads on Windows PCs languish without proper multitouch capabilities or customisability - something easy to achieve on Macs with the free BetterTouchTool from Boastr.net.

Windows 10 is supposed to fix this somewhat, but while Microsoft finally gets set to copy a few of Apple’s gestures and multi-touch capabilities, Apple has powered ahead by introducing haptic feedback to the very large trackpad surface on every portable Mac it makes.

The expectation that Apple will introduce Force Touch on iPhones, iPod Touches and iPads as well, given that it is now on at least some portable Macs and is on the Apple Watch will put Apple’s iDevices even further still than its Android, Windows and BlackBerry-based competitors.

Hopefully, Apple will introduce Force Touch to all its portable Macs either later this year or in 2016, and to its iDevices either this year or next, too - as well as its Bluetooth wireless trackpad.

While other companies satisfy themselves with cloning Apple’s look and superficial feel, Apple goes ahead and gives feel a whole new meaning.

We’re sure to see more apps taking advantage of Force Touch capable trackpads now that Force Touch is here, but it will clearly be years before all Macs without Force Touch trackpads are too old to be used with OS X 10.16 or whatever we’ll be up to by then.

Force Touch by itself isn’t a reason to upgrade an older Mac if you’re still happy with its performance, but it is a great little bonus for anyone buying a new MacBook that is Force Touch equipped.

Indeed, it’s a shame that not all Macs have it yet - MacBook Air owners are missing out, as are 15-inch MacBook Pro with Retina users, but 12-inch MacBook owners will be able to experience it soon.

The Force Touch trackpad also helps make the 12-inch MacBook as thin as it is, with Apple innovating in an area no-one truly expected Apple to innovate in, despite the fact there was a patent for Force Touch trackpads a couple of years ago and leaked info that the ‘MacBook Air with Retina’ wouldn’t have a traditional click.

Before I finish, I’ve also read several comments at Mac sites from people who’ve gone into Apple Stores or Apple resellers to have a look at what’s new and started using the 13-inch MacBook Pro with Retina and Force Touch - and didn’t realise it was a Force Touch trackpad they were using!

It was only when the Mac was powered down and no click could be made or heard did some of those commenters realise they thought the Force Touch click was a real click.

The 13-inch MacBook Pro with Retina also offers an additional hour of battery life - 10 hours compared with 9 on last year’s model, along with Flash that’s twice as fast as last year’s model.

I used the Black Magic disk test software that you can download from the Mac App Store and saw the same performance gains reported at other sites - which is truly remarkable stuff and makes old fashioned spinning hard drives seem ultra glacially slow in comparison.

Whether Apple augments Force Touch technology with the air gesture technology Apple purchased by buying PrimeSense, the company that helped Microsoft make the first Kinect sensor, is yet to be seen, but it’s clear to see that Apple is forcing itself to not only create better products but only introduces these features, capabilities and benefits when it thinks they’re truly ready for launch.

Force Touch is a simple idea whose time has come, and while it isn’t an earth shattering ‘absolutely must have’ update all its own just yet, together with everything else Macs offer, it’s another touching gesture from Apple to improve what it does - even in areas you didn’t imagine needed any improvement.

I’ll certainly miss Force Touch when I return the 13-inch MBP I’m testing it on, but look forward to getting it back again when I upgrade to a new MacBook model that offers it in the future.

Until then, it’s back to a non-Force Touch trackpad on a MacBook Pro that doesn’t have it, to which I’ve very quickly re-accustomed, but within a couple of years if not sooner, we’ll be living in a world where every new Mac and presumably iDevice will offer the feature.

When that happens and you upgrade, the force will definitely be with you!