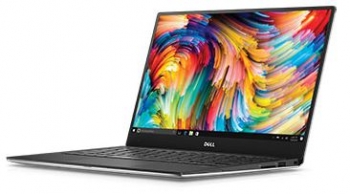 Dell’s XPS range comprises commercial quality, ultra-light clamshell or 360° hinge notebooks starting with a 7th Generation Intel Core i5 to Core i7 with 13.3" or 15” HD non-touch to QHD touch screens. There are three chassis types, 11 model specifications, and countless customisations.

It has been a while since I reviewed anything Dell and my impressions were that Dell make commercial PCs and notebooks. That is both right and wrong as it is clear the XPS range has strong commercial underpinnings, but it is also sold retail via Microsoft Store, and it and the Inspiron (consumer) range are sold through major retailers.

Dell is very clever to send me this model – after two weeks of use I can say it is the pick of the litter and the Rose Gold chassis is both elegant and distinctive. It is not that it does anything special or outperforms similar Microsoft Surface, HP Spectre, Acer Swift 7, ASUS Zenbook 3, or Lenovo Yoga models – it is just that it has a certain je ne sais quoi about it that says it is going to be a keeper. 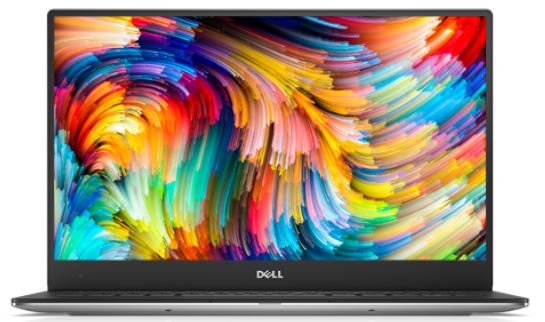 The back panels appear to be removable with the right ultra-small Torx screwdriver. The memory is not upgradeable, but the SSD uses an M.2.80 connector that should be upgradable. In any case, it also has an SD slot so that obviates tearing the back off!

Sitting idle, it uses about 20% memory and 1% CPU – that shows Windows has been well tuned for this device. Windows 10 Home can be upgraded at order time to Pro for $100.

The first impressions are great – a matt aluminium Rose Gold lid, a gently glowing strip light at the front, and a gold base well protected by two rubber strips. Premium.

Open it and the deck is soft feel faux carbon fibre matt black surrounding an edge-lit keyboard (not backlit through the key caps), a large, matt glass trackpad that will take the cursor from top right to bottom left of the screen in one swipe, good-sized palm rests (important for hunt and peck typists) and a reasonable keyboard.

The 13.3”, 3200 x 1800 touch display is bright without being overly saturated – more natural colours. It is covered in Gorilla Glass NBT which has 8 to 10 times the scratch resistance of glass.

It has a matt finish and the screen reflection in office lighting conditions is low. It was a little less readable under the midday sun. This screen has 105.7% of sRGB gamut – very good. Contrast at 305 cdm2 is good – slightly below the glossier screens of the HP Spectre and MacBook.

It has chiclet style, 1.3mm travel keys and that is fine for most use – touch typists will find they are slowed down by about 10% compared to the HP Spectre.

The glass trackpad is responsive and only takes one swipe to cover the screen, alleviating the need for a mouse. It supports pinch and zoom and three-finger tap.

The specification says it has a fingerprint reader – this early review unit did not.

Using a D-Link DIR-895L AC5300 tri-band router placed on another floor — probably 10 metres away through a solid concrete floor — it consistently achieved a 866.7 Mbps connection.

In comparison to a Surface Book at 234-468Mbps, this is uber fast, courtesy of the latest “Killer Wireless AC 1535” adaptor that supports Wave 2, Beamforming, 2 x 2 MU-MIMO and a new ExtremeRange technology. 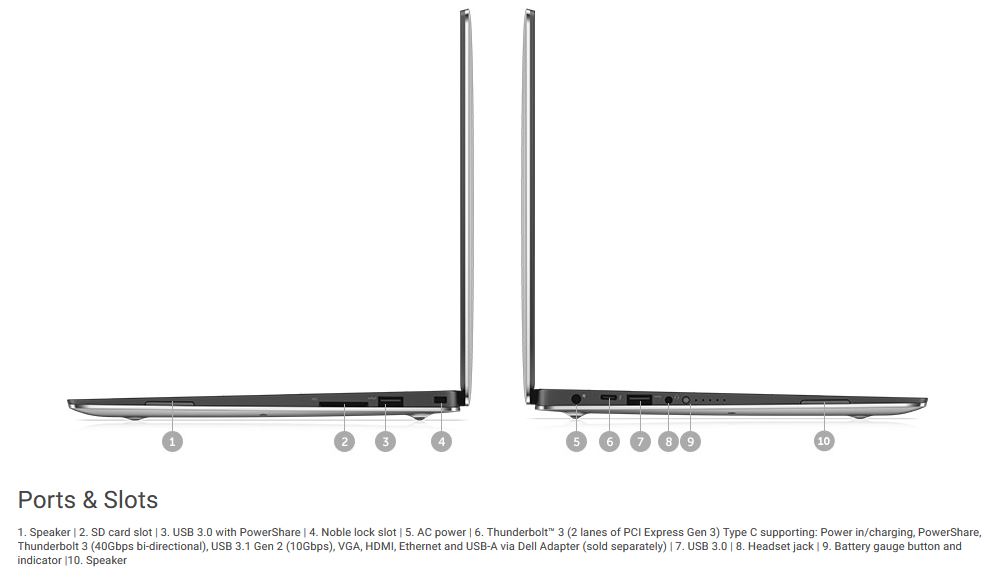 I tested it with a Kensington SD4600P universal USB-C dock that supports up to 100W USB-C. It charges via its own power adaptor and has been certified for the XPS Thunderbolt USB-C range. It also supports single 4K (4096 x 2160) or dual HD screens using its internal video card, and a range of USB-A 3.1 and USB-C ports. It would definitely become the XPS companion.

It has a 780p webcam and while perfectly this is adequate for Skype, it would have been nice to have an IR camera to support Windows Hello. It is placed at the bottom left of the screen and has dual front mics. The off-angle camera accentuates double chins!

The 2 x 1W stereo speakers will produce adequate volume for personal use but the Realtek sound quality — out of the box — is decidedly average.

It does have a Waves MaXXAudio Pro app that allowed the sound to be tweaked and this made a real difference to the quality of sound output over Bluetooth and to an AV amplifier. I have seen this app in some smartphones and tablets too and it can be genuinely useful to tweak the output.

The Intel 7th Generation Core i7-7500U, 2.7/2.9GHz is used in many high-end notebooks and you can expect the same performance as any of these. Passmark Benchmark gives it a rating of 5242 which is about half the top Intel powerhouse desktop i7-7920HQ processor.

It is fan-less. It did not seem overly hot to use on my lap, but during a video loop, it reached 32° around the CPU in the base. Perfectly acceptable.

It would have been nice to compare this with the 16GB RAM found in some competitor’s models. It replayed 4K content at 30fps and HD content at 60fps. It is not a gamers' GPU but it is fine for all web-based games.

Dell’s website says it has Intel IRIS Graphics 640. My review model had Intel HD Graphics 620 and shared memory although it is a review unit that has been around since launch.

The 256GB PCIe NVMe SSD had 339.31 Mbps read — just above the HP Spectre — both of which are well above the average of around 200Mbps for older SSD drives.

It is a 60Wh battery. In my tests, it lasted just over 13 hours on a Web surfing loop (different Web pages with animations), 11 hours of HD video (50% brightness), and about nine hours of office use (Word, Excel, Web surfing, YouTube etc.).

There may be thinner and lighter laptops out there, but at present this gets the tick because of the amazing screen, external port flexibility, and battery life – not forgetting its Rose Gold good looks. Sure, the review would not have been as glowing for an Intel Core i5, polished silver/aluminium model, but it would probably only lag by one point at most.

For what it is – almost perfect. 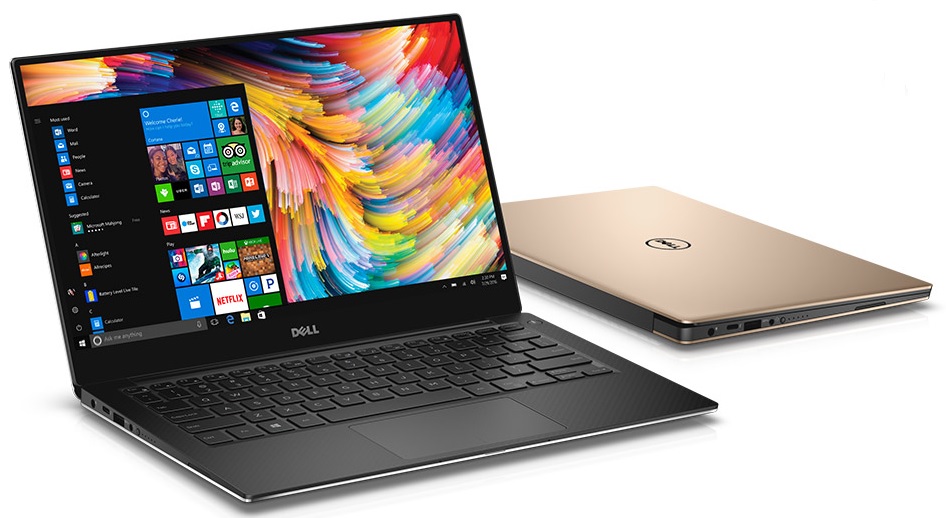 Don’t overlook the XPS 13 2-in-1 either, as 13.3” QHD, touch screen, 360° hinge models have additional functionality though they use the Core i5-7Y54 and i7-FY75 (previously classed as mobile processors). 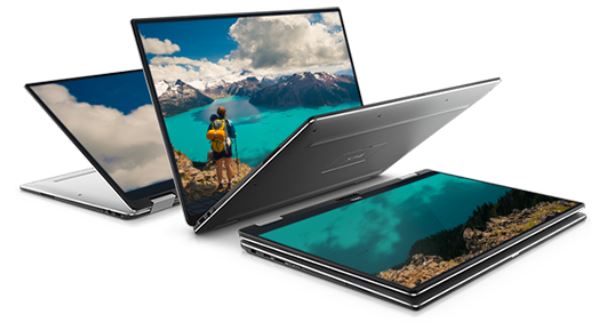 More in this category: « Gigabyte Aero 15 – Why should gamers have all the fun? (review) Microsoft Studio – a masterpiece (review) »
Share News tips for the iTWire Journalists? Your tip will be anonymous