I had seen the Zenbook 3 UX390 at an evening launch function and, yes, it looked nice, light, and distinctive but it is not until you open the box, remove it from its elegant black faux leather sleeve that you really see the wow factor kick in. This is the stuff of electric dreams if you like waif-like notebooks – 11.9mm thin, 910g, and smaller than an A4 sheet of paper at 296 x 191mm.

Increasingly a rarity in high-end notebooks is the absence of a touch screen. Now you, like many others, may not think that is necessary but if, like me, touch is a deal-breaker you will need to look at the ZenBook Flip UX360 or the yet to be released 13.3” ZenBook Flip S (UX370) – both have 360° hinges and touch screens and well exceed my expectations for quality and desirability.

First a segue. One of iTWire’s regular readers contacted me wanting a recommendation for a small, light, notebook. I offered several choices of 360° hinge or clamshell laptop, all touch, all with Core i5/i7 processors:

Perhaps, he said, he had too many options. So, we arbitrarily narrowed it down to the HP, Dell, Asus.

And like a dog with three bones, he drew up an Excel spreadsheet, compared specs (they were all too close for comfort) and spent copious time in major retailers looking at them all. In the end he bought the ZenBook 3, a non-touch screen, purely on instinct – it was lovely. Who said the head should rule the heart?

The segue is an important lesson. There are so many choices that often you buy the one that wows you — the ZenBook 3 — hell the whole ZenBook range with its beautiful dark spun alloy and gold trim finish is wow.

I think I have spent enough time on first impressions – wow it is beautiful.

The Intel Core i7-7500U, 2.7/3.5GHz, two-core/four-thread processor is a low-voltage processor for ultralight laptops and tablets. It is not the desktop “powerhouse” i7 that you expect with a Passmark of 5244 – the desktop versions will give from two to four times the grunt.

I only mention that because when people see Core i7 they expect a V8 under the bonnet. In general office use — Word, Excel, Outlook, YouTube, movies, etc — it was fine with no lag despite a dozen or so open apps but I suspect that was more to do with the 16GB of RAM on the review model.

The integrated Intel 620 Graphics will support a 4K external monitor or with the right dock, dual monitors and more. It is not designed to play more than the typical browser-based games.

The SSD is an NVMe model – as fast as you can get. On a read/write test it managed 1000MB/s – a 2GB file in 20 seconds! Externally copying to a Samsung T3 SSD it achieved and an average of 150MB/s.

Wi-Fi AC speed was initially disappointing sitting more often sub 100Mbps yet the Intel AC8260 adapter is capable of 867Mbps. I test all devices on a test bed approx. 20 metres (through a cement floor) from a D-Link DIR-895L AC5300 tri-band router.

But following a firmware update, it jumped up to between 234-540Mbps – more like it. This issue has been identified on various AC8260 user forums.

The screen is excellent – crisp, and clear colours. ASUS claims it reaches 72% of NTSC – that is a measurement for US buyers and means you can see 72% of NTSC colours. According to LifeWire it is equal to 100% sRGB or 76% AdobeRGB. As good as it gets for an IPS screen and I like the thinner bezels.

Like all Intel HD Graphics controlled screens it defaults to maximum battery saving and that means less than half the nits making it look dull. It is a good idea to open the driver and up the brightness, a tad – makes a huge difference to the screen.

It has a 300-nit brightness that while good for office use can be a bit washed out in direct sunlight.

A shallow throw .8mm is normally too little to achieve maximum speed – indeed, initially I lost about 30% of my normal touch-typing speed. That improved after a couple of days, but it is still a shallow throw keyboard. Despite that, it is a pleasure to use and is very responsive.

The glass touchpad is Microsoft certified and oversized which is great as it reduces the need for a mouse. On occasion, I swiped the fingerprint reader (top right) and it interrupted the swipe – no deal-breaker and it is nice to have a fingerprint reader, although it is at the expense of Windows Hello facial recognition. 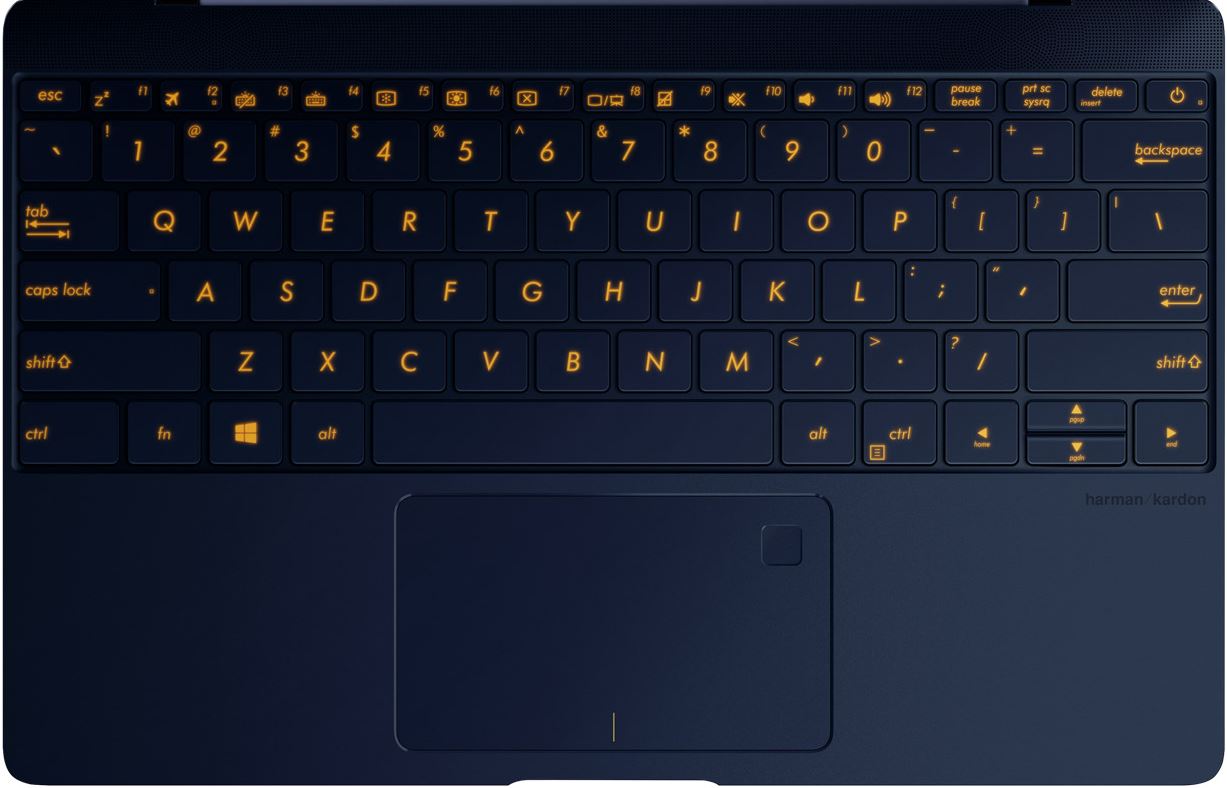 While it boasts four Harman/Kardon tuned, 5-magnet speakers and a four-channel smart amp it is not earth-shatteringly loud. It gives a clear balanced signature (bass boosted, mids recessed, treble boosted) and this carries over to Bluetooth and 3.5mm jack (aux) when used with external devices. Four speakers help bass response and treble but it lacks the “room filling” volume for anything other than personal use. 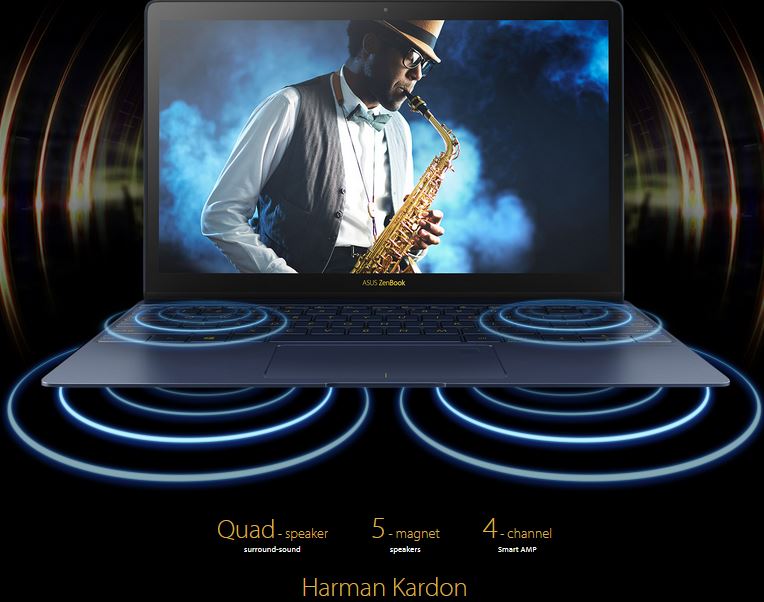 The webcam is a standard 720p but it has a very narrow field of view – it is fine for one-on-one Skype. The two array microphones, do their job well in Skype and Cortana.

In office use, I got around seven hours and in an HD video loop at 50% brightness, I got more than eight hours. Other tests have reported similar findings with the worst being 3 hours and 15 minutes with absolutely everything maxed out – 100% screen, Wi-Fi, Bluetooth, HD video etc.

While the Kaby Lake is an energy sipper it does get hot under load. In normal use, it sat around 30° on the base but in extreme testing — video loop — it reached over 40°. That is a little uncomfortable on one's lap.

I could not test CPU throttling, but I suspect that it caps GHz speed to control heat when the minuscule fan cannot remove it.

I used it over a period of two weeks as a travel notebook. On that score, with the included dongle and on looks alone, it is a 10 out of 10. It was hard to give back and it quickly cured my apparent need for a touch screen. I love the fast charge when travelling.

As a “productive” notebook, the shallow throw loses a point – good but not the best travel keyboard for productivity.

Yes, for absolute portability. It is a very sexy ZenBook from a company that tries hard to please and has good local Australian support. It is unique! I now understand why the iTWire reader bought this “wildcard”.

But for me, no, as I am so used to touch that I would probably choose between the new soon to be released ZenBook UX370 Flip S or the very interesting HP x2 or x360 Spectre. Then again, the Dell XPS 13 (also clamshell and 360° hinge models) was a knockout too (iTWire review here).

The point is that there is a lot of choice at present and ASUS deserves to be on the list – you will be pleasantly surprised. 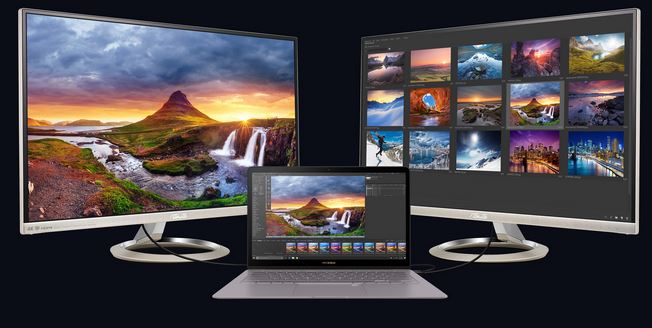 More in this category: « Dell Inspiron 13 – a 360° with maximum flexibility (review) Samsung’s Galaxy Tab S3 coming (sneak preview) »
Share News tips for the iTWire Journalists? Your tip will be anonymous