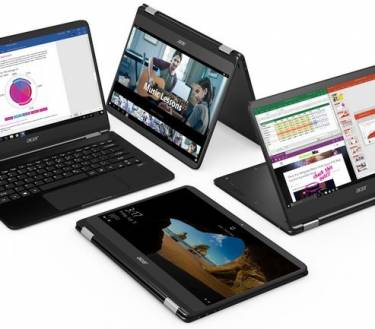 Acer’s Spin 7 is a 360° hinge, 14” touch screen, notebook, that is one of the thinnest, lightest, Intel 7th generation Core Y notebooks in the value segment.

Acer makes good stuff, occasionally great stuff, but usually it focuses on the mass consumer, government or education market. It's newish non-touch Swift 7 (reviewed here) and the Spin 7 reviewed in this article cross the line into business-grade but offer better value that its competitors in that space.

Interestingly, in IDC's 2017 US Consumer PCD (Personal Computing Device) Survey, detachable (hybrid) owners held slightly more favourable attitudes than convertible [360°] owners to their devices. However, owners of both were far more likely to recommend a convertible over a detachable.

That has been my experience – while I love the hybrid format (Surface Pro) for travel, it is the Surface Book/HP x360 format that enables far more productivity.

Before we get into this let’s position this 360° hinge convertible, touch notebook that sells for $1999.

It is neither the fastest or the most powerful as it uses an i7-7Y75 processor (previously known as the Core M7). This has one of the lowest thermal design power (TDP) ratings of just 4.5W and has operating speeds from 1.3GHz to 3.6GHz when needed. It primarily enables two things – a fan-less design and about eight hours use from a 2770mAh battery.

So, buy it for office, student or home and you will be very satisfied – it is not a gamer's device with Intel HD 615 integrated graphics, but Candy Crush and browser-based games are fine.

Set-up is typical Windows 10 Home. It will ask you for a Windows account (which you can skip) and recommends an Acer ID to manage warranty and communications with Acer.

It is a black slab and the matt finish is a fingerprint magnet.

To build this, Acer has traded off some things – compromises made for thinness, weight, and price. For example, it has no SD Slot, it uses the Intel HD 615 GPU (not a gaming processor), slower DDR3 RAM, no backlit keyboard – it’s a good, solid, basic, ultralight notebook.

I like the Core i7-7Y75 in the right place – it is very efficient and adequate for general office and domestic use. It is fan-less, has good battery life and good performance for office tasks, browsing, etc. But it “chugs” when you load a processor-hungry app like a video editor and don’t bother with graphics processor hungry games.

It is the same processor used in some models of the Dell Inspiron 12/XPS 13, Acer Swift 7, ASUS Zenbook/Flip Transformer, Lenovo 710/Yoga/MiiX/Thinkpad, HP x360/Envy 13 and the Toshiba Portege X20. Even the MacBook Pro touch 13” uses an i5-7Y54 processor.

PassMark tests bring it in at 3965 – by comparison, a full Core i7-7700K desktop processor is 12,232 but to use the latter processor in a notebook would severely reduce battery life and need extensive cooling.

The serial ATA SSD was slower at around 120Mbps – you don’t get M.2 PCIe SSD for this price.

That is until you find the Acer Quick Access and enable colour intelligence and then go to Intel’s HD Graphic control and realise that the screen is set to maximum power saving. A brief play with contrast, hue and saturation made the screen punchy and alive.

The screen has a relatively glossy finish and that means higher reflectivity – you need to get the screen angle just right and avoid strong light sources above and behind you. It is a fingerprint magnet. It also has a blue light shield feature. 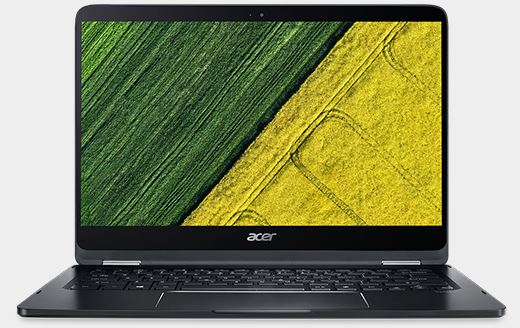 Ten out of 10 for the oversize trackpad that allows a single swipe to move the cursor from top right to bottom left – equal to the HP Spectre/x360 and the Microsoft Surface Book. What that means is you will not need to use a separate Bluetooth mouse and it does two-finger scrolls and other gestures. You can also disable it when using a mouse.

It uses island-style chiclet keys with a 1.2mm throw and 54g actuation. Not exactly the greatest for touch typists who will experience about a 10% speed drop, but good enough to knock out a story.

But to help extend battery life these are not backlit, and that is a feature you may miss.

I also like the large wrist rest area – perfect for resting your wrists on while two-finger typing.

Acer claims eight hours (under indeterminate use parameters) and in a video loop test, it achieved around seven hours at 50% screen brightness and six hours at 100%.

Charging using the Acer brick was fast – under an hour from zero to 100%. But I had issues with using a standard USB-C charger – it simply did not work.

What that means is that any USB-C adaptor you buy (like the common HDMI/USB-C 3.0) needs to have pass-through charging and you cannot simply use another USB-C phone charger.

There is plenty of volume from the Dolby Audio stereo speakers under the base with good stereo separation. Like all small speakers, it has a proclivity for mid and treble – forget any heavy bass. This is for easy listening and I quite liked it.

As with all down firing speakers in the base, you can muffle it when placed on different surfaces like balancing it on your lap.

Sound output via Bluetooth and 3.5mm audio to an AV Amp and headphones was as good as can be expected from a Realtek signal processor.

There are two USB-C 3.1 ports (one for data and charging) and one for data, as well as a 3.5mm audio port. I would have preferred an SD slot as well but again it takes up valuable space. It lacks HDMI (buy a dongle).

Wi-Fi was good, achieving speeds commensurate with the Qualcomm Wi-Fi AC/Bluetooth 4.1 adapter which is an AC, Wave 2, 2x2 MU-MIMO adapter with an average speed of 433Mbps and up to 866Mbps within five metres of the router.

I would advise buying a Kensington SD4600P powered dock (tested here) to give any USB-C device more features as well as support for 4K screens.

I preferred it to the Swift 7 – simply because I have grown so used to touch on a notebook. If you don’t mind trading off raw horsepower for battery life, this is a great choice.

During use, I found myself liking the tablet mode. At 11mm thin it was manageable and the 1.2kg weight was no issue – some tablets weigh that. I gravitated to a lot of tablet use as it disables the keyboard in that mode.

Absolutely. If I was looking at the best bang for buck this is it. It will suit university students and home users as much as it will be great on an office desk (no Ethernet port so use a third-party dock/dongle or Wi-Fi. 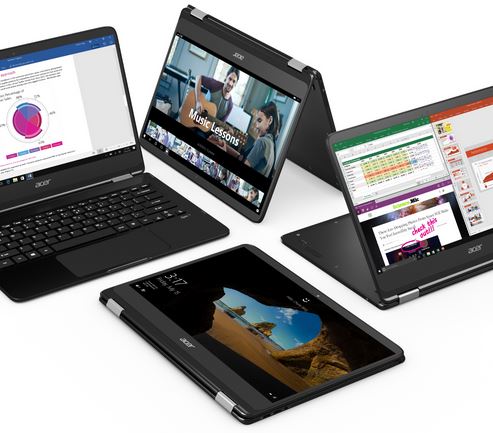 More in this category: « ASUS ZenBook 3 Deluxe – now with Thunderbolt (first look) Gigabyte Aero 15 – Why should gamers have all the fun? (review) »
Share News tips for the iTWire Journalists? Your tip will be anonymous