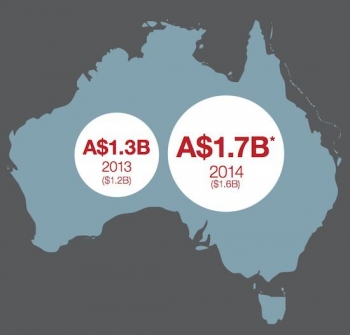 The Australian SMB cloud market grew to $1.7 billion by mid-2014, according to a new study.

Parallels is best known for the Parallels Desktop virtualisation software but also has a substantial business supplying software such as Plesk Panel to hosting and cloud operators.

The company has just published its fourth annual SMB Cloud Insights report, which sized the local SMB cloud market at $1.7 billion, up from $1.3 billion in 2013.

Part of this growth is the result of a change in definition, with cloud servers now being included "due to their increasing use among SMBs."

But the SMB IaaS market grew from $343 million to $561 million, so leaving aside the $92 million spent on cloud servers that's still very respectable growth.

Parallels officials said the growth was also due to additional spending on add-ons for hosted servers (eg, backup or security), as well as growing demand for managed services.

Price and security were cited as the most common concerns about switching from in-house to hosted servers.

Not surprisingly, the most common uses for IaaS servers are web servers, CMSes and ecommerce systems.

Parallels predicts 15% CAGR over the next three years for this segment. While the web presence market is close to saturation, there are still opportunities for service providers to offer design and management services, mobile optimisation, and web applications specifically targeted at SMBs.

'Unified communications' (Parallels' loose definition includes all the components of UC such as email and hosted PBX even if they are not in fact unified) showed an impressive 50% growth to $331 million. Most of that growth came from SMBs adding users.

Growth in this segment is expected to ease to a still useful 36% CAGR until 2017.

The most common applications are still file sharing, accounting and backup/storage, and that appears set to continue during the next three years. However, Parallels reported increases in SaaS payroll and HR systems by small and medium businesses, and in VDI use by medium businesses.

"Australian SMBs continue to prove their increasing sophistication in leveraging IT to scale their respective businesses, no matter which industry they're in," said Parallels Asia Pacific and Japan service providers business vice president Pavel Ershov,.

"In today's business environment, the best-of-breed cloud solutions can deliver enterprise-grade capabilities at a fraction of yesterday's costs. The results are reaffirming for local service providers, as Australian SMBs should continue to embrace the cloud opportunity."

The report can be requested here.