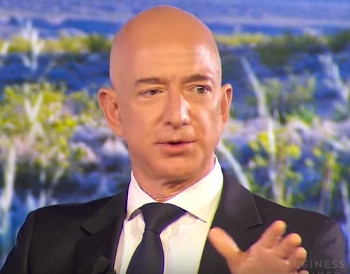 Jeff Bezos: Being the richest man in the world brings its share of headaches.

An analyst from Citi Research has suggested that it might be a good idea for Amazon to split, separating its e-commerce business from its cloud division to avoid any regulatory pressure.

Mark May told the American television network CNBC that Amazon chief Jeff Bezos should have the growth of Amazon Web Services, its cloud division, in mind when he was planning for the future.

Amazon became the second company after Apple to achieve a market valuation of US$ trillion, albeit briefly.

In its results for the second quarter, AWS generated US$1.64 billion of the company's total operating income of US$2.98 billion. AWS revenue grew by 49% year-on-year, bringing in US$6.11 billion.

May said if the retail giant was split up, the e-commerce arm would be worth about US$400 billion while AWS would be valued at US$600 billion on its own.

Talk of splitting up Amazon has come up because of the bitter criticism levelled at the company by US President Donald Trump, with many of his tweets suggesting that his administration could go after Bezos over anti-trust issues.

May said the fact that Amazon had achieved a US$1 trillion valuation and Bezos becoming the world's richest man, ahead of Microsoft co-founder Bill Gates, was not doing Amazon much good in being a small target when it came to anti-trust issues.

Amazon has good lobbying power in Washington DC and is said to be leading the race to win a US$10 billion defence deal that is expected to be awarded by the end of this month.

The contract, known by its acronym JEDI — Joint Enterprise Defence Infrastructure — is meant to unite all Defence services under one cloud vendor as the CIA did in 2013 with Amazon at a cost of US$600 million.

More in this category: « Microsoft's 'Germany-only' cloud service being wound up Rackspace selected as first Google Cloud ANZ-managed services partner »
back to top