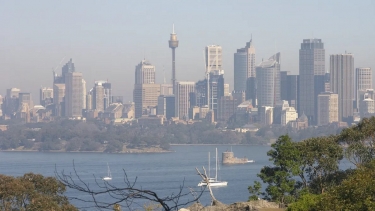 The City of Sydney has announced it will target net zero carbon emissions by 2035 – five years earlier than previously planned – in a move to help avert catastrophic climate change.

“We’re in the middle of a climate emergency, yet the Federal Government continues to ignore the community, expert advice and international pressure,” the Lord Mayor said.

“Australia’s emissions have been going up since 2014, and in the face of the Government’s shameful inaction we are stepping up to reduce our emissions steeper and sooner.

“The City of Sydney was the first local government in Australia to become carbon neutral in 2007 and our operations are now powered by 100% renewable electricity.

“This year we’ll meet our 2008 goal to reduce emissions by 70 per cent by 2030 - nine years earlier than initially targeted. We’re leading by example to tackle the climate crisis and reaching net zero as soon as possible is the next step.”

The Lord Mayor says the target is in line with research confirming Australia and the rest of the world need to reach net zero emissions by 2035 to avoid the catastrophic consequences of more than 1.5 degrees of global heating.

“While the City of Sydney cannot tackle the climate crisis alone, we can lead and encourage others to do the same within their communities.

“Greening the grid, diverting waste from landfill and increasing green building standards will all play a part in how we meet the challenges of the climate crisis and create a city that is net zero in less than 15 years.

The Lord Mayor says the city will attempt to slash local area emissions by targeted programs to manage waste, energy and fuel - noting that energy consumption produces 73% of the local area’s greenhouse gas emissions - and by encouraging businesses, residents and other organisations to use renewable energy sources and switch to Green Power, the City plans to significantly reduce this number.

On tackling transport emissions, the City of Sydney says the transport sector is the second biggest contributor to emissions after energy - in 2018–2019 it was responsible for 16% of the local area’s carbon emissions, either through petrol from vehicles or the electricity used to power public transport.

The City says it aims to lower these emissions by continuing to encourage a shift away from private vehicles and towards public transport, walking and cycling, as well as supporting businesses shift to electric vehicles.

And while the City does not control much of the transport sector, it says it will help to reduce emissions from transport by partnering with the Australian and NSW governments, to make it easier for them to achieve their emissions targets and to support off-street charging stations for electric vehicles.

The City of Sydney also says that from tackling single use plastics to recycling food scraps, reducing waste and better waste management is another key component of lowering the area’s emissions.

Environmental Strategy 2021-2025 targets waste reduction across the residential sector, aiming to divert 90 per cent from landfill by 2030.

“By far the greatest contributor to residential waste is food, accounting for more than a third of space in our bins. The City is running a food scraps recycling trial, with around 11,000 households currently able to access the scheme – with another 10,000 households expected to have access by September 2021,” the City of Sydney said.

“Recycling food waste saves landfill space and reduces greenhouse gas emissions. It can be used to create green electricity and fertiliser. Every tonne of food waste the City diverts, and processes saves 1.69 tonnes of carbon emissions.

“Waste and waste management currently account for around 9% of the city’s emissions.”

The City of Sydney says it will take action to further improve the environmental performance of its own operations, and from July 2020, it began using 100% renewable electricity, and is expecting emissions to drop to more than 76% below 2006 levels by the end of June 2021.

The City of Sydney lists its sustainability achievements to date including:

The Environmental Strategy 2021-2025 will be presented to the City of Sydney Council for approval this month and, following approval, the draft strategy will go on public exhibition from 19 May to 16 June.