NewSat out of time and out of money Featured 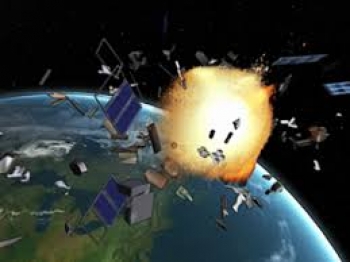 Troubled satellite company NewSat has released a long statement to the ASX that essentially says it is trying to raise more money and everything is on hold for now.

For the first time, NewSat has publicly admitted that it may not be able to raise the cash it needs to finish building its flagship Jabiru-1 satellite.

At this stage satellite manufacturer Lockheed Martin is still building Jabiru, but it says it will not continue unless it is paid more money soon. And launcher Arianespace will not keep the 2016 launch date open unless it is paid more money by 3 May, and may not launch the thing at all. If NewSat defaults, Lockheed-Martin will presumably try to sell the partially competed Jabiru-1. Or it might scrap it – space junk before it has even been launched.

Time, money, and the patience of NewSat’s creditors – all are running out.

NewSat’s shares remain suspended from the ASX. It is trying to raise more money and it doesn’t want its shares listed because that would be “likely to be materially prejudicial to its ability to successfully complete its negotiations with its counterparties.” In other words, it is worried that if its shares started trading again, there would be another sell-off from spooked investors and that would make things even harder.

Everything hinges around NewSat being able to convince someone, somewhere, to put more cash into a company that has been devouring the stuff in recent years. It is certainly trying hard, judging from the frequency with which it has been assuring us that discussions are proceeding and that something is about to happen.

We were always assured that the discussions would be successful but now, ominously and for the first time in one of the company’s public pronouncements, we are told that “there is no certainty that any capital raising will be successful.”

Founder, CEO and legendary super-salesman Adrian Ballintine must be losing his touch. That, or things are bad – really bad. Or both. Little wonder Ballantine doesn’t want the shares reinstated just yet – the price has plummeted over the past year as the news has gotten worse and the assurances that all will be well have rung increasingly hollow.

There remains substantial room for the share price to fall further – NewSat’s much reduced market capitalisation is still $644 million. If the shares were traded again it is unlikely the price would rise until there is a confirmation of further funding. A fire sale can’t be ruled out.

NewSat’s long statement to the ASX can be viewed here (warning: not suitable for investors or young children). It starts off talking about a new (see below) and how wonderful that is for the company, but it quickly descends into corporate doublespeak that is unable to disguise the dire straits in which the company finds itself.

The main problem is that NewSat has been unable to find funds to fill an increasingly wide gao in its cashflow. There is a section in the announcement headed ‘Jabiru-1 financing update’.

NewSat had previously announced that it was in discussions with the lenders for Jabiru-1 to ask them to overlook certain ‘technical” breaches of its loan agreements - a ‘waiver’.

“Extensive and positive discussions towards securing a resolution have been ongoing since the company’s last announcement. A waiver had been thoroughly negotiated with the entire lender group and substantial progress made towards agreement on the terms of the waiver and its execution.”

But now, things are not so good. A key creditor group is COFACE, a consortium of the French Government owned Compagnie Francaise d’Assurance pour le Commerce Exterieur (COFACE), and three European banks. COFACE lent money on the basis that Europe’s Ariane rocket would be used to launch Jabiru-1, but it seems it has run out of patience,

“NewSat remains in ongoing dialogue with the entire Jabiru-1 project lender group and is exploring avenues to bridge the current lending gap, including pursuing alternative lending and other capital sources.

“The discussions with the lender group are ongoing and incomplete, and may not be resolved for some time. NewSat is seeking solutions to raise further capital at this time and has engaged a financial advisor to assist in this process.”

Doesn’t exactly fill one with confidence, does it? The new financial advisor is US investment group Peter J Solomon Company (PJSC), which we are told has “extensive and deep experience in restructuring and recapitalisations, mergers and acquisitions, and public and private financings in the media, entertainment, communications and technology industries.”

But here’s the clincher. Tucked away at the end of the glowing description of what PJSC will do for NewSat is the following sentence: “Although efforts are underway to secure needed capital in short order, there is no certainty that any capital raising will be successful.”

It doesn’t get any better. The section on Lockheed Martin says: “In the event the current difficulties are not timely resolved, Lockheed Martin could terminate its satellite manufacturing agreement with NewSat, which would result in a loss of the company’s ability to carry on with the Jabiru-1 project.”

Adrian Ballantine’s dream is turning into a nightmare. And up in the Top End, as autumn descends, the Jabirus are flying home to roost.

More in this category: « Hey, Unisys does mainframes too! The 'Netflix tax' - Honest Joe and the big tax lie »
Share News tips for the iTWire Journalists? Your tip will be anonymous