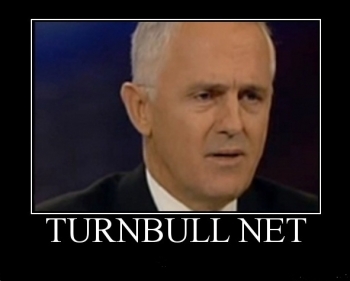 Who’d a thought it? Malcolm Turnbull has announced how pleased he is that the NBN has exceeded its targets. Easy, if you know how.

It gives me little pleasure to say “I told you so.” Here’s what I wrote in iTWire sister publication CommsWire exactly a year ago, on Bastille Day, 14 July 2014:

“It’s an old trick. If you’re having trouble reaching your targets, simply replace then with other targets that are easier achieve. Then, when you reach them, or better still exceed them, use that as evidence of how well you’re doing. That is exactly what seems to be happening now.”

It was happening a year ago, it happened the previous year under Labor, and it is happening again now. Read what Malcolm Turnbull had to say yesterday about who well the NBN rollout is doing:

“The NBN has met its financial year rollout targets for only the second time since the company was established. The targets are a great credit to the professionalism and dedication of CEO Bill Morrow and the whole NBN team.

“The company beat its target for the number of brownfields premises serviceable by almost 10% and its brownfield rollout targets by almost 14%. It also met its overall targets for activations across all technologies.

Sounds good, until you look at it a bit more closely. First, there’s the pea-and-thimble trick of lowering expectations to the point where they are easily exceeded. Then there’s the fact that the project was always going to accelerate once the groundwork had been laid. And you could argue that if the previous Government’s fibre-to-the-premises plan been allowed to proceed, numbers would have been much higher by now.

Here’s some of the comments on Turnbull’s website about this non-announcement:

It’s really pretty pathetic. Whatever the merits of the previous government’s ambitious plan, whatever problems it had, are now arguments for the past. NBN Turnbull style is now nearly two years in, and it is true it is getting better and exceeding expectations.

But – and this is a point that really does bear repetition – those expectations are much, much lower than they were. Eighteen months ago, shortly after being elected, Turnbull said he was disappointed that he had to break his pre-election promises regarding the NBN, and that it would cost more and take longer than he had said,

There were many problems of Labor’s all-fibre NBN. It was hastily conceived and, at first, poorly executed. But by the time the Coalition was elected in September 2013 those initial problems had been largely solved and the dream of a world-class national broadband network was well on the way.

This Government has dismantled it, slowing down the implementation (which it promised would be quicker), and leaving Australia with a network that will be out of date before it is even installed. Australia continues to slip down the global broadband rankings while our Minister of Communications pats himself on the back for doing a bad job better than he could have.

The shame of it all is that it won’t even save us money. In fact, in the long run this bastard ‘multi-technology mix’ NBN will cost Australia much more than Labor’s ‘do it once do it right, and do it with fibre’ plan. The Coalition’s NBN costs have blown right out, and Turnbull’s deputy Paul Fletcher’s bald admission to a room full of journalists last year that the Coalition had exaggerated the estimated cost of Labor’s all-fibre network rather let the cat out of the bag.

The Turnbull NBN’ is vastly different to the one initiated under Labor. Turnbull has already broken several election promises regarding the NBN’s cost and schedule. In that environment, keeping expectations low is a sound strategy.

More in this category: « The 'Netflix tax' - Honest Joe and the big tax lie Service is now the thing »
Share News tips for the iTWire Journalists? Your tip will be anonymous