Hey, Unisys does mainframes too! 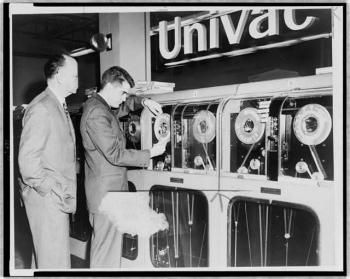 We recently wrote a piece about how IBM mainframes were the only ones left. Unisys has reminded us that such is not the case, and that its larger computers are alive and well.

OK, OK, I’m sorry. As an old mainframer myself I should have known better. (I even wrote a book on the subject back in the 1980s).

When IBM introduced its new z9 mainframe a couple of weeks ago I wrote: “IBM is the only company still making large commercial mainframes. The clones died 20 years ago – they couldn’t keep up with the technology, and alternative architectures such as those from Unisys and NCR have all disappeared. Fujitsu and NEC persist in Japan, but sell little outside of their home market.”

My friends at Unisys called and reminded me that the company does indeed still make mainframes, and they are still in use by hundreds of Unisys customers around the world.

The company, which was formed in 1986 with the merger of Burroughs and Sperry, inherited a mainframe architecture from each. Burroughs and Sperry made up two of the five IBM mainframe competitors collectively called the ‘BUNCH”, which stood for Burroughs, Univac (the previous name of Sperry), NCR, Control Data, and Honeywell.

Burroughs mainframes ran an operating system called MCP (‘master control program’) on top of a proprietary chip architecture. I started my career as a computer operator on IBM and Burroughs mainframes, and I well remember how much better the Burroughs was than the IBM.

Nearly 30 years after the merger, both mainframe architectures still exist, though they have faded. Qantas still uses a 2200 mainframes (now called ‘Dorado’) and Burroughs machines (now called ‘Libra’) also still have many users. Unisys uses the name ‘ClearPath’ to identify the two architectures.

Unisys has been phasing out the old proprietary chipsets that these machines use, migrating them to Intel Xeon x86 processors. The transition will be complete by the end of this year. They will still be able to run OS 2200 and MCP, but in emulation mode (with no loss in performance) on the Intel chips.

Unisys has been selling high end Xeon based servers running Windows for years. They are amongst the largest and fastest Windows servers available – mainframes in all but name. The current machines have the ES3000 and ES7000 model designations. Unisys also has an integrated ‘fabric’ system called Forward, also based on Intel chips.

It’s an impressive line-up, but not enough to save Unisys from sliding back over the years from leading vendor to bit player. It announced its annual financials last week – its revenues in 2014 were US$3.36 billion.

The rest of the BUNCH is long gone from the mainframe arena. Unisys is still around, and still making mainframes, however you define them. The company is a link to the era when mainframes were the only type of computer there was.

More in this category: « Government discovers digital transformation NewSat out of time and out of money »
Share News tips for the iTWire Journalists? Your tip will be anonymous