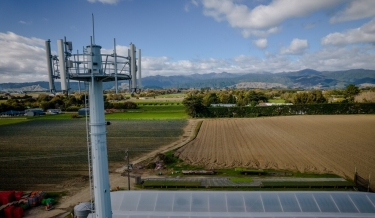 Vodafone NZ is jointly owned by shareholder group Infratil and Brookfield Asset Management, according to reports. As part of the transaction, Infratil will reinvest to hold 20% in the new TowerCo.

"We have unlocked a significant portion of the value of our original equity invested in Vodafone while retaining that investment and a 20% stake in TowerCo. InfraRed Capital Partners and Northleaf Capital are high-calibre investors who share our vision for what the new TowerCo can deliver across New Zealand. The transaction is a win-win for Infratil shareholders," said Infratil CEO Jason Boyes.

Each of the new buyers will hold a 40% stake in the newly-formed TowerCo.

According to Computer Daily News, the deal is subject to approval by the NZ Overseas Investment Office.

If the government agency greenlights the deal, TowerCo will enter into a 20-year service agreement with Vodafone NZ, providing access to both existing and new towers. TowerCo will also commit to building at least 390 additional sites over the next 10 years to enhance Vodafone's coverage.

The owners
InfraRed is a global investment company, managing over 220 infrastructure projects in 17 countries with US$12 billion ($17 billion) of equity under management in private and listed funds, according to its website.

It has offices in London, New York, Sydney, and Seoul.

Northleaf Capital is a global private market investment firm headquartered in Canada with offices in North America, London, and Melbourne. It manages US$20 billion ($29 billion) worth of public and private infrastructure commitments, pension plans, endowments, foundations, and offices.

This first appeared in the subscription newsletter CommsWire on 19 July 2022.

More in this category: « TPG Telecom fires back at Optus, ATN, and Commpete for derailing network sharing deal International Finance Corporation pumps $271 million to bolster Telecom Argentina’s connection »
Share News tips for the iTWire Journalists? Your tip will be anonymous