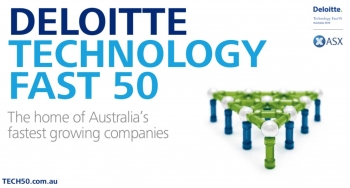 The standout winner of the 2014 Deloitte/ASX Technology Fast 50 in Australia with an incredible 3626% revenue growth is comms company NEXTDC Ltd, with 49 more tech-savvy grinning winners making the coveted cut this year.

Joshua Tanchel, the leader of Deloitte’s ‘Technology Fast 50 Program’ said the percentage revenue growth is ‘calculated over three years (2012 to 2014)’ and has to reach cumulative revenue of $8m over that period. The numbers are also cross-checked and verified by the entrants’ accountants or a registered auditor.

“This year’s winner is a standout. Almost doubling last year’s revenue growth, NEXTDC is already one of Australia’s fastest growing designers, developers and operators of a network of data centres,” said Tancel.

The awards night was held on Thursday 13 November 2014 at the Sydney-based ASX (Australian Securities Exchange), with what Deloitte described and I saw with my own eyes as ‘a full house of technology stalwarts and start-up hopefuls’.

The first presentation of the evening is embedded directly below and aside from and introduction by Deloitte’s leaders welcoming everyone to the event, it features a fascinating talk between Deloitte’s Stuart Johnson and tech superstar and five times Technology Fast 50 winner, James Spenceley, CEO of Vocus.

The second video directly below features the presentation of the top winners of the Deloitte Australia Technology Fast 50 for 2014, with NEXTDC’s CEO, Craig Scroggie, accepting the top award for the night.

The third item below is an embedded Slideshare with the slides from the event.

But back to the rest of the evening’s event. We heard that one of Australia’s largest online forex brokers and last year’s Rising Star winner, Pepperstone, was this year’s Leadership Award winner (1098%). And health.com.au was this year’s ‘Rising Star’ with 8873% growth over a period of two years 11 months, a strict one month short of the three year eligibility criterion for the full Tech Fast 50 list.

Tanchel said: “the winners list demonstrated the rise of the internet and the importance of both software and cloud technology solution providers”, and added that: “The opportunity to accelerate convenience, cost management and accessibility to all regardless of size continues to encourage new and innovative entrants to create brand new niches as well as disrupt existing markets.”

As testament to the importance of the sector, this year’s sponsor, Elmer Funke Kupper, CEO of the Australian Securities Exchange said: “Given the strength of competition in the ICT industry in Australia and the rapid increase in the number of emerging high-growth companies, there is little doubt the companies on the Deloitte Technology Fast 50 list this year are among the best in their field.”

He added that: “This is a positive program that raises the profile of some of Australia’s fastest growing and most exciting companies.”   Funke Kupper continued, stating: “The listed technology sector in Australia has a strong history. Companies such as Seek, REA Group and Carsales.com have achieved strong success and are world leaders in their respective fields. Their leaders have been determined advocates for the sector and for the growth that can be achieved by technology companies in Australia.”  The ASX CEO said that more recently the listed technology sector in Australia had experienced further success with the IPOs of OzForex, Freelancer, iSentia, Gentrack, Vista and 3P Learning.

“The combined market capitalisation of listings in the sector during 2013/2014 was more than AUD$2 billion,” Funke Kupper said.

“When you add these names to previous winners of the Tech Fast 50, including online retailer Kogan, SaaS provider Atlassian and online foreign exchange company Pepperstone, a picture emerges of a significant and maturing technology sector in Australia,” Tanchel said.

Deloitte Private National Managing Partner David Hill said: “Deloitte is committed to fostering the emerging leaders of the tech industry, helping them to connect with key players across the start-up ecosystem, and assisting these innovative and committed companies take their growth plans to the next level. It is great the ASX has been so supportive of these initiatives.”

The Leadership awards are in honour of the Technology Fast 50 winning companies that have achieved revenues in excess of $50 million this financial year.  Hill said: “To achieve $50 million in revenue is significant. To achieve revenue growth of the magnitude required to make this year’s Technology Fast 50 winners list is awesome. Congratulations to these nine standout companies!”

Tanchel said: “While there are many deserving companies out there, the 12 rising stars Deloitte selected this year are drawn from across Australia, with the top five growing by just over 1000% to almost 9000% by delivering services through the internet, or in the communications and software sectors.”

This year’s Deloitte Technology Fast 50 composition reflects a consistent trend over the last few years where:

- Most of the top 50 companies are based in NSW - a consistent pattern since the rankings began in 2001.

This year 31 companies are from NSW, 13 from Victoria, three from Queensland, two SA and one WA.

- Privately held companies dominate the index, 43 are privately owned, six are listed and one a public unlisted company.

- 19 companies are involved in the internet industry, 16 in software, nine in communications/networking, four in computers and peripherals and two in biotechnology/pharmaceutical.

Deloitte’s David Hill said: “I trust you will find this year’s Technology Fast 50 winners as inspirational as we do as they adopt and leverage new technologies and develop valued and innovative solutions for customers.

“For instance, by utilising such technologies, Deloitte Private Connect has set a new benchmark for what individuals, entrepreneurs and family businesses should expect from their accountant - more time to run their business, trusted advice, at a fixed, monthly price.

“We use cloud technologies with actionable insights from Deloitte advisors to help entrepreneurs take their business to the next level. We are giving our start-ups what we know they want – time to do what really matters to them.”

For the full list of winners and further information regarding the Deloitte Technology Fast 50 Australia program, go to the Tech 50 website, with more information also available at Deloitte’s website.