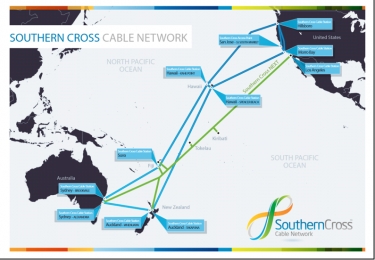 The US$350 million Southern Cross NEXT project will be a high capacity express route, providing the lowest latency data-centre connectivity between Sydney, Auckland, and Los Angeles to date, along with connections to Fiji, Tokelau and Kiribati.

The NEXT project will land at Coogee Beach in Sydney, and Takapuna Beach in Auckland, New Zealand, with shore end facilities already complete.

Southern Cross was recently awarded a contract to DXN to build modular cable landing stations at its landing sites across the Pacific Islands.

Southern Cross says the system will be a state-of-the-art 4 fibre pair undersea route which has been developed as an extension of the existing Southern Cross ecosystem, allowing NEXT customers to leverage Southern Cross’ extensive Point Of Presence (POP) and access infrastructure already in place, as well as flexibly assign capacity across the three routes, maximising diversity and resiliency.

The new route is designed to carry more than 70 terabits of traffic, which Southern Cross ensures it can cater for all customers’ growing demand requirements well into the future, with services offered on the new system an extension and integration of those offered across the current Southern Cross platform.

“Despite the impacts of COVID-19 across the globe, the project team and our partners have managed to work around issues as they arise and minimise impacts to the project schedule with RFS (ready for service) targeted to be completed by Q2, 2022.

“It is an amazing result and a credit to the calibre of people we have working on the project, not only in Southern Cross, but also ASN, DXN, Pioneer and Axiom, along with our Pacific partners in Fiji, Tokelau and Kiribati.