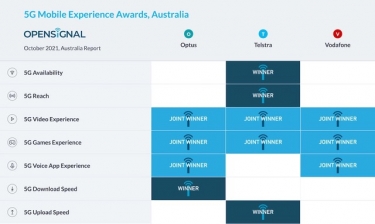 Telecommunications company Telstra takes the top spot for its 5G upload speed while Optus ranks first for its download speed, according to the 5G Experience report by independent telco research firm Opensignal.

Opensignal reported there has been 5G-related developments in the mobile market recently. Back in June, Telstra claimed to have reached 75% population coverage with its 5G network. As part of the operator’s new ‘T25’ strategy, it is aiming to increase this to 95% by the end of the 2025 financial year (30 June 2025). By that date, Telstra also expects 80% of its mobile traffic to be on its 5G network.

In early September, Opensignal says the Australian Communications and Media Authority (ACMA) began accepting applications for the auctioning of spectrum in the 850/900 MHz band (NR bands n26 and n8), which is due to take place in late November.

A total of 70MHz of paired spectrum is up for auction and bidders will be restricted to holding a maximum of 82MHz of sub-1 GHz spectrum in the country’s post populated areas and 92MHz elsewhere. This new spectrum will help operators reach rural areas.

In August, Vodafone Australia signed an agreement to obtain additional mid-band 5G spectrum in the 3.6GHz band from Dense Air. Optus activated commercial mmWave 5G in six locations in May, while in June Telstra said that it had 50 operational mmWave sites across Sydney, Melbourne, Brisbane, Adelaide, Goulburn, and the Gold Coast. On the other side of the globe, the US has also seen mmWave 5G boost capacity enormously.

Opensignal says another way of enhancing the 5G experience is to move ahead with newer 5G standards that aim to improve responsiveness. Vodafone announced the activation a standalone access (SA) 5G service in parts of Sydney, while Telstra claimed to have enabled a SA 5G service back in May 2020.

In its report, Opensignal analysed real-world 5G data gathered in the 90 days starting 1 July ending 28 September to see how the three national operators—Optus, Telstra and Vodafone—stack up.

The report used data from users when they were connected to 5G networks. It also analysed the 5G experience in four leading 5G cities: Brisbane, Melbourne, Perth and Sydney.

In Opensignal’s last report, Optus and Telstra users observed the joint fastest download speeds when connected to 5G. This time around, Optus wins 5G Download Speed award with a lead of 42.8Mbps (18.6%) over Telstra. Optus was able to break the statistical tie that existed between it and Telstra due to a 32.8Mbps (13.7%) increase in its score, while Telstra users saw their average 5G speeds decline by 24.1Mbps (9.5%). Meanwhile, Vodafone’s 5G speeds rose by 14.8Mbps (10.7%) to reach 153.2Mbps, but both Optus and Telstra users are a long way ahead of our Vodafone users for 5G Download Speed.

Telstra continues to dominate on 5G Availability and 5G Reach

Telstra wins again the 5G Availability and 5G Reach awards. The came first for 5G Availability with a score of 15.9%. Telstra’s lead has more than doubled since the last report — 8.5 percentage points ahead of Optus.

Telstra’s score rose by 4.5 percentage points, while Optus’ was statistically unchanged from the last report.

5G Availability is the proportion of time that 5G users had an active 5G connection, while 5G Reach is a measure of how mobile users experience the geographical extent of an operator’s network. In summary, Telstra users can access 5G technology in more of the locations they visit and for more of the time than other operators’ users.

In our April 2021 report, all three operators were statistically tied for the top spot for the experience of our users when using voice apps over 5G networks. This time, Telstra’s scores dropped with Optus and Vodafone taking the lead. While all three operators’ scores have slightly fallen since our last report, they all remain in the Good (80-87) category. This means that many users were satisfied, but some experienced minor quality impairments.

For the second time in a row, users observed no statistically significant difference between Optus, Telstra, and Vodafone when streaming video or playing multiplayer mobile games over the operators’ 5G networks. All three operators have retained their Excellent ratings for 5G Video Experience (75 or above) and continued to place in the Good (75-85) category for 5G Games Experience.

While Telstra holds the Download Speed Experience and 4G Coverage Experience awards, it has been less successful elsewhere in the Mobile Network Experience Report.

These changes, says Opensignal, mean that Vodafone has the lion’s share of awards this time around, with three outright wins—including new wins for 4G Availability and Upload Speed Experience — and two joint wins compared to Telstra’s two solo victories. Meanwhile, Optus continues to be a joint winner for Games Experience and has swapped a joint win for 4G Availability for one in Voice App Experience.

In this report, Opensignal analysed real-world data gathered in the 90 days starting 1 July and ending 28 September to examine how the operators Optus, Telstra and Vodafone — stack up. Our overall results include measurements from our users across all network technology generations (including 5G). This report looks at the overall experience of 5G users — those with a 5G device and 5G subscription — across 3G, 4G and 5G networks along with the time they spent connected to each technology generation.

Vodafone has broken the statistical tie that existed between it and Optus in the last report. Vodafone users spent the most time connected to 4G or better networks—96.1%. This change occurred due to a 1.8 percentage point increase in Vodafone’s score since the last report, while Optus’ score was statistically unchanged. However, Telstra continues to hold the 4G Coverage Experience award.

Vodafone wins Upload Speed Experience award with a score of 10.1Mbps, which was 0.4Mbps (3.6%) faster than that of second-placed Telstra’s score of 9.7Mbps. Optus is in third place with a score of 8.2Mbps.

Our Telstra users yet again observed the fastest average download speeds (57Mbps). The operator’s lead over its rivals has jumped—from a still 9.1Mbps (23.2%) over Vodafone in our last report to around 1Mbps. Vodafone and Optus are statistically tied for second place. Telstra’s lead lengthened because its score increased by 9 Mbps but Optus and Vodafone’s scores rose by a smaller amount — 7.4 and 4.9Mbps, respectively.

Telstra drops out of contention for Games Experience

In thelast report, all three operators were joint winners for the Games Experience award as our users did not observe a statistically significant difference between their scores. This time round, only Optus and Vodafone share the top spot. This change was mainly driven by a 1.7 point decline in Telstra’s score. Once again, users across all three operators’ networks had a Fair (65-75) Games Experience. This means that they found the experience to be average. In most cases the game was responsive to the actions of the player with most users reporting that they felt like they had control over the game. The majority of players reported that they noticed a delay between their actions and the outcomes in the game.