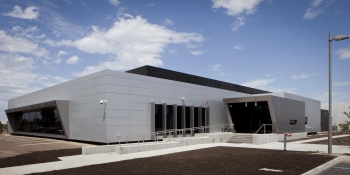 This week NAB commissions its new data centre in the Melbourne suburb of Deer Park. The bank estimates it will save $22 million in operating costs over the next seven years.

National Australia Bank Chief Technology Officer Denis McGee will cut the ribbon on the bank’s new data centre this week. The state of the art facility is designed to consolidate the bank’s 22 existing data centre, facilitate migration to the cloud, and reduce the bank’s current energy usage by half.

“The new data centre is the centrepiece of NAB’s multi-year, multi-billion-dollar investment to transform our total IT environment,” said McGee at a briefing to journalists and analysts in Sydney. “This includes our core NextGen system and our applications, infrastructure, network and culture.”

McGee said NAB is the only Australian bank to undertake an IT transformation on this scale, though the other banks may beg to differ. They are the biggest IT users in Australia, and large and profitable banks by world standards. All are investing heavily in new IT systems.

But none of them have anything like NAB’s new data centre, which is probably the most technically advanced yet built in Australia. It is in the industrial suburb of Deer Park, 17km west of Melbourne’s CBD. McGee said it is “a milestone towards NAB’s goal to become an orchestrator of services rather than building and maintaining our own systems. It will increase our capacity to process, store and analyse high volumes of customer and transaction data quickly and cost-effectively in readiness for a digitised banking future.”

The Deer Park centre has two 1000 square metre halls. It is a purpose-built site constructed by US data centre specialist Digital Realty. Each hall has two uninterruptible power supplies (UPS) and three back-up generators. Each UPS is in its own fire-proof cell, and emergency battery power (boosted to 60% above industry standard at 16 minutes) to allow adequate time for generators to take over in the event of mains power failure.

The two halls are separately cooled, with extra cooling in the cavity between them. The site connects to two network exchanges and access to two grid power supplies. Data connections within the centre are duplicated to create redundancies.

“This is the next generation of data centre innovation,” said McGee. He said operational cost reductions following the move to the new data centre is estimated at $22 million “over time”. This will come from a consolidation of over 20 existing data centres and data hosting facilities into two centres, the Deer Park facility and an updated NAB existing data centre at Knox, in Melbourne’s eastern suburbs. McGee would not say how much the new data centre would cost, but said it was an essential investment as maintaining the existing infrastructure was not an option. “We needed to start from scratch to do what we had to do.”

A key aspect of NAB’s new IT strategy is the migration of many existing legacy systems to new platforms based on NAB’s new private cloud platform, which it calls IOD (Infrastructure On Demand). “It will virtualise our servers and storage, while we purchase infrastructure as a service from IBM, Telstra, Oracle and other vendors,” said McGee.

“NAB’s private cloud is currently being developed with IBM to host a range of internal applications, including our collaboration tools, application hosting and system development and testing. The new facility will perform this work with only 75% of its designed capacity, leaving 25% for expansion. This will reduce product release schedules as cables, infrastructure, power and rack space is not provisioned, as there is capacity on demand.”

But McGee said there was no timetable for the migration of the core OLTP (online transaction processing) systems that run the bank’s ATM systems for its 12 million customers. As with the other banks, these run on 40 year old IBM IMS/CICS systems that are housed on IBM zSeries mainframes that have survived many predictions of their extinction. “We will move off them eventually,” said McGee. “But it is not likely for at least five to seven years.” Mainframes, it seems, will never die.

A key aspect of the new data centre will be its many environmental benefits. Currently 40% of all NAB’s energy consumption is accounted for by its existing data centres. McGee said the new facility will more than halve this and deliver savings of 9.1 million kWh over the next ten years, equivalent to powering 222 houses 24x7 over that time.

The energy savings will come from reducing the average PUE of existing data centres from around 2.5 to less than 1.3. PUE (power usage effectiveness) is a standard data centre measurement for determining the energy efficiency of data centres – a score of 2.0 means half the energy is being used for non-IT functions like cooling and power distribution.

It will achieve these efficiencies with such techniques and technologies as:

NAB is the only Australian bank on the board of the Open Data Centre Alliance (ODCA), a vendor and user body designed to share experiences in data centre practices and develop standards in such areas as cloud processing. Commonwealth Bank, Telstra and the University of Melbourne are the only other Australian members, but McGee said there would be another announcement this week (he was a little coy when asked if this new member will be another major Australian bank).

McGee is a board member of ODCA and said NAB has led development of the cloud security standards for the finance industry. It also leads the big data working group to plan operational management standards. “We were the first Australian bank to become carbon neutral, and we have been able to share ourexperiences and be the driver of the ODCA Carbon Neutral Usage Model.” Many major non-finance users, like BMW and UPS, are also members.

One of the most impressive things about the NAB technology briefing is that it was held at all. It almost always only vendors who proactively talk to the media – it is refreshing to see a user organisation share its technology plans. This is the cutting edge of technology – real world applications.

The IT industry would not exist without users, a fact too many vendors, analysts and media tend to forget.

More in this category: « Cubby comes out NABERS for data centres here – at last »
Share News tips for the iTWire Journalists? Your tip will be anonymous