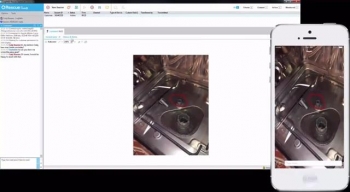 LogMeIn has come up with a way to allow remote support technicians to see what the customer is looking at. It's called LogMeIn Rescue Lens.

Add remote control, and they are often able to fix issue in front of customers' eyes, perhaps improving the chances of those people being able to cope for themselves if the same problem arises again.

But what if the support issue concerns a PVR, food processor, or some other product?

LogMeIn thinks it has cracked this problem, and today announced LogMeIn Rescue Lens, which uses the camera built into smartphones and tablets to see the actual situation rather than having the technician rely on the customer's description.

The Rescue Lens app is available for iPhone, iPad, and Android phones and tablets. LogMeIn director of products Peter Zeinoun told iTWire that Windows support "is on our roadmap" but probably won't happen until Windows 10 arrives.

Even then, it's not a forgone conclusion that the Rescue Lens will support Windows 10. 2015 is "a make or break year" for Windows on phones, he suggested, as Microsoft is "late to the game."

The Rescue Lens app provides text chat between the customer and technician, and if the latter marks up the video image to draw attention to a particular part or control, that annotation automatically moves with the camera. These capabilities can be seen in this LogMeIn video:

"The idea came from our developers," Zeinoun told iTWire.

"Two guys said 'hey, this is something that's possible,'" and they built a prototype in about a week and a half, he said, adding that the company does encourage its developers to think of ways to improve the product.

Rescue Lens is a new feature of LogMeIn Rescue, and will be part of all LogMeIn Rescue licences for existing and new customers. LogMeIn Rescue provides integration with Salesforce.com, Zendesk, ServiceNow and other ticketing systems.

There was a "big debate" within the company about whether or not to charge extra for Rescue Lens, Zeinoun told iTWire, but in the end it was seen as a way to make LogMeIn Rescue appeal to a new set of customers.

Rescue Lens - the first major part of LogMeIn's 'support of things' initiative - is expected to be generally available in April.

The company is considering allowing its clients to build Rescue Lens functionality into their own customer care apps, he told iTWire, but initially it will only available as a generic, standalone app.

"It is the latest initiative in the realm of support of things, and it speaks directly to the needs of today's ever more connected consumer. As such, its impact on customer engagement could be considerable.

"Moreover, this is a solution that obviates the need for shipping so many faulty products, it cuts down on the need for so much onsite support.

This solution could mean real cost savings. Even a small percentage of calls using this capability could have a big impact."

More in this category: « Microsoft again raises spectre of lockout with secure boot Technology ‘inhibits’ customer engagement & management »
Share News tips for the iTWire Journalists? Your tip will be anonymous