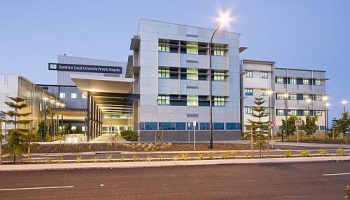 A new hospital on the Sunshine Coast is using desktop virtualisation technology - but the biggest benefit probably isn't the one you'd expect.

The biggest advantage has accrued to clinical staff, as they are the employees who move around the hospital the most, and are the most likely to use shared computers. Rather than having to log out of Windows on one computer and then log in at another - which can be time-consuming - they can simply and quickly suspend their virtual desktop and resume it on the next computer they use.

The idea of a 'follow me desktop' that preserved its state between sessions was "quite a culture shock" for users, said Mr White, even though the IT team took pains to make the experience as familiar as possible. For example, access to a device is achieved by touching the employee's ID card to a reader and entering a PIN.

Since the hospital was new, it presented a good opportunity to try a different approach, though "we're always looking for ways to make an improvement," he said.

The approach may be used elsewhere within Ramsay Health Care, he said, but as the company has only recently completed its Windows 7 migration and an associated hardware refresh, desktop virtualisation will only be used where it shows clear benefits. If it hadn't been for that migration, a broader adoption of the technology would have been a distinct possibility.

However, that migration meant the organisation had already put together "a robust SOE" (standard operating environment) for Windows 7, which is now standard across physical and virtual desktops. Applications are delivered to both types of desktop in the same way, using Citrix XenApp where appropriate.

Remote access has been improved through the adoption of Citrix NetScaler, but this facility is used mainly by administrative and IT workers rather than clinical staff, mostly to work from home.

"We don't do too much BYOD on premises," Mr White said, largely because the card-and-PIN access controls can't be conveniently implemented, and because most people find shared devices more convenient than carrying their own around.

Mr White suggests that organisations shouldn't adopt desktop virtualisation out of a desire to reduce costs, but rather to add value or to make life easier for staff.

He also suggests that IT staff should "read a lot" before trying to implement virtualised desktops. There is plenty of documentation about reference architectures and best practices, and learning from other people's mistakes is better than making them for yourself.

"Talk to Citrix," he advises, "they do this all the time."

Since desktop virtualisation is so user-facing, it is important to prepare users in advance, he suggested.

The greenfields situation at Sunshine Coast University Private helped, but his team started by working with IT savvy employees that were open to change so it had an opportunity to iron out any wrinkles during a proof of concept exercise before the broader rollout.

And because a virtual desktop implementation touches so many aspects of IT infrastructure it is important to get all the right people involved, including those primarily concerned with servers, hypervisors, storage or networking.

Disclosure: The writer travelled to Sydney as the guest of Citrix.

More in this category: « If you want a really big, really sharp display watch out for this Panasonic Lenovo betting Windows 8.1 will attract business users »
Share News tips for the iTWire Journalists? Your tip will be anonymous