Chromebooks and Citrix here to stay 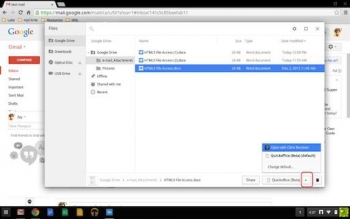 Virtualisation vendor Citrix is confident of an ongoing role in delivering virtualised applications and desktops to mobile devices, especially Chromebooks.

The alliance between Google and Citrix revolves around the latter's ability to deliver virtualised Windows applications or even complete desktops to Chromebooks.

As recently reported, Woolworths is using Citrix's software as part of a move from Windows to Chrome OS.

This was one of the first joint customer opportunities for Citrix and Google, Citrix senior director of business development for cloud and desktop alliances Todd Terbeek told iTWire.

He said there is a "really good fit between Google and Citrix" and that there are "a large number of opportunities" for the alliance around the world, including Australia.

New, faster and better Chromebooks are now on the market, so they have "really become more mainstream."

Most organisations are testing Chromebooks, allow their use as part of a BYOD program, or are already using them, he asserted, saying the devices have advantages in terms of total cost of ownership and security.

Mr Terbeek does not believe Citrix's role in this market is merely about providing a transitional bridge between legacy Windows applications and mobile devices until SaaS equivalents of those applications appear and are adopted.

He says Windows applications that are regarded as essential by their users will be around for years to come. Different customers rely on different applications, and there are two main obstacles to 'cloudification.'

The first is that regulatory and compliance issues may work against the adoption of SaaS tools, making it easier to deliver a virtual application.

The second is that where a small number of users within an organisation rely on a legacy application it may not be cost-effective to switch to anything else. He noted one (unnamed) customer that found it had more than 1000 active applications, but a large proportion of them were only used by around 20 people.

Citrix has supported Chromebooks since 2010, Mr Terbeek said, and will be releasing a new version of Receiver for Chromebooks during this quarter. Major improvements reportedly will be in the areas of printing, USB redirection, among others.

More in this category: « BMC Computers boosts productivity with Kaseya Ventyx calls the faithful to the Gold Coast »
Share News tips for the iTWire Journalists? Your tip will be anonymous