Brands and retailers to use beacons, pushing 1.6BN coupons to consumers by 2020 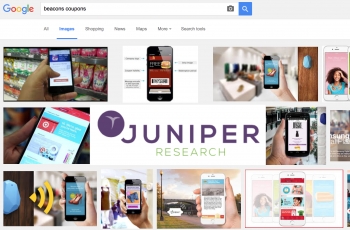 Here come the coupons, and the long awaited push for beacon deployment, with 1.6 billion coupons to be pushed to consumers by 2020.

Research and analyst pros Juniper have issued a new report which shows that proximity marketing is finally going to gain traction, with nearly 1.6 billion coupons set to be delivered annually to consumers via beacon technology by 2020.

This is up from a relatively tiny 11 million in 2015, as retailers seek to develop proximity marketing campaigns in and around their stores.

Juniper’s new research, dubbed ‘Mobile & Online Coupons: Redemption, Loyalty & Consumer Engagement 2015-2020’ is, as always, on sale to relevant parties at relevant prices, and finds that ‘several leading US retailers had now deployed beacon networks, with Macy’s having installed more than 4,000 in its stores.’

It cited the case of the Chinese jewellery chain CTF (Chow Tai Fook), (which on a personal note any visitor to Hong Kong seems to see situated on virtually every street corner, there are so many of them!), where a campaign in early 2015 saw redemption rates approaching 60%, resulting in a sales uplift of $16 million for the company.

Meanwhile, the research highlighted the opportunity presented by locating beacons outside storefronts, with the UK’s Proxama deploying a network of beacons in locations such as buses, taxis, shopping malls and airports.

It argued that the introduction of similar ‘open beacon’ solutions could serve to drive both footfall and engagement.

The research also pointed out that the growth in contactless infrastructure and greater consumer awareness around NFC would lead to significant opportunities for proximity marketing in the medium term.

According to research author Dr Windsor Holden, ‘The launch of Apple Pay dramatically increased public and retailer awareness of NFC. As contactless usage accelerates at POS (Point of Sale), retailers will then move to incorporate NFC at all stages of the customer lifecycle, including loyalty and engagement.’

More details below, please read on.

However, the research cautioned that the use of beacon technology was very much a work in progress, with many retailers concerned that excessive, indiscriminate messages ‘pushed’ by the beacon could be perceived as intrusive and damage their relationship with the customer.

With that in mind, Juniper’s research suggested that ‘retailers should follow the lead of Target, which has stated that it will limit the number of push notifications – including coupons and special offers – to 2 per visit.’

As per usual, there is a complimentary whitepaper, this time dubbed ‘Coupons ~ Personalisation Goes Hyper’, which is available for free download, ‘together with further details of the full research and the attendant Interactive Forecast Excel (IFxl).’

More in this category: « Red Hat’s ’virtual training program’ in APAC launches Facebook says Facebook Pages is the business page for the ages »
BACK TO HOME PAGE
back to top