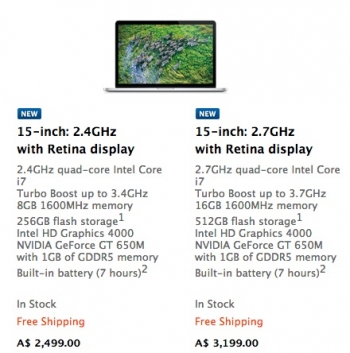 Apple's latest configurations of the MacBook Pro feature faster processors and lower prices. One member of the MacBook Air range is also cheaper. But is the company safe from the IT pricing enquiry?

At current exchange rates, these prices are close to those prevailing in the US once GST is added. For example, the US price of the 2.5GHz 13in MacBook Pro is $1590, and that MacBook Air configuration costs the equivalent of $1485.

That's a modest markup of around 4%, which isn't so different to what we've seen with other recent introductions allowing for GST and exchange rate prevailing at the time. For example, the current iPad was announced on 24 October 2012, and the US price adjusted to Australian dollars was $351, compared with the actual Australian price of $369 - a 5% difference.

It is unusual for Apple to change the price of a product after its introduction, except when older models remain in the catalogue after the arrival of what most people would regard as a replacement. A case in point was the iPhone 4S that went on sale at $799 for the 16GB model, but on the release of the iPhone 5 was reduced to $679.

Is Apple the bad guy when it comes to Australian pricing? Please read on.

Apple, Adobe and Microsoft have been summoned to appear before the House of Representatives Committee on Infrastructure and Communications' inquiry into IT pricing.

While Apple's own products do not appear to be subject to a significant markup on US prices, pricing at the iTunes Store, the App Store and the Mac App Store can be very different.

Nick Cave's new album 'Push the Sky Away' costs $16.99 in the Australian iTunes Store, but US customers only have to pay US$9.99 ($10.60 including GST). Reportedly Australian music labels held out for higher prices in the iTunes Store.

App prices are slightly tricky, as it seems Apple sets price tiers for the App Store in each territory, and developers are free to pick the tier for their product. In practice, this means a US$6.99 game such as Minecraft - Pocket Edition costs $7.49, which is less than seven cents more.

This suggests the company is hardly the carpetbagging profiteer that some people are trying to paint it.

More in this category: « Autodesk moves emphasis to cloud Most of the growth in international voice traffic is coming from Skype »
Share News tips for the iTWire Journalists? Your tip will be anonymous