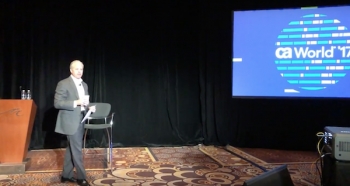 There are plenty of articles out there about CA World 17 from the wide range of journalists that are here at the event as I type, just search Google, but there's only one journalist who is taking the time to film video interviews and various executive events.

Naturally, that's me, and I present to you the Day 1 and Day 2 video interviews, Q&A sessions, show floor tour and more.

You can also watch the excellent Day 1 keynote with CA chief executive, Mike Gregoire and the Day 2 keynotes featuring Otto Berkes, CTO and separately in his own keynote, Aymen Sayed, President and Chief Product Officer, with all three here.

And, before we get to the videos below, here's the link to my first CA World 2017 article, entitled "CA World 17 opening keynote: the importance of creativity in finding 'pivot' moments," which is about CA Technologies CEO Mike Gregoire's opening keynote, and then his discussion with filmmaker and extreme sports climber, Jimmy Chin. You can watch the keynotes using the links above or in the linked article.

Then there's my closing article, which follows this one you're reading now, which is called: "CA World '17: If your business doesn't have a 'Modern Software Factory,' will it survive?".

It is a wrap of the CA World 17 event and all of the most important announcements, along with some analysis thrown in for good measure, so if I hope you get to read it if you're interested!

We spoke about the major themes of this year's conference, the challenges in APJ, how the various countries compare in the region, and interesting 'pivot points' he's seen customers take to get to the next level, using CA Technologies products and services.

We looked at what the future might hold, great advice Martin had received in life to help him get where he is today, and his final messages for viewers, readers and his current and future customers.

I asked Ken about the definition of Agile Management in 2017, and how it has matured over the past year since CA World 16.

We talked about great examples of agile management in action, about CA's partners on the show floor on the topic, what the future might hold, great advice and his final message to readers and viewers, and his customers in the APJ region.

I introduced both gentlemen, and noted I had spoken and video interviewed them both previously.

I had video interviewed Stephen back in 2015 on the coming 5G Seismic shift, and then in 2016 during CA Tech's API Application Economy APJ Summit, as part of a series of executive video interviews and presentations recorded on video.

I had spoken to Mark and video interviewed him at last year's CA World 16, which you can see here as part of a series of executive video interviews back then.

This year I spoke to them both in the same interview, and we had a discussion about the app economy, digital transformation, the "Modern Software Factory" that was a huge theme of this year's event, who the movers and shakers are in the APJ region taking all of this on and more.

Both shared their thoughts on the future, what they'd learned that had most impacted them in the last year, and their final messages to readers, viewers and customers, present and future, in the region.

Also by this time we three Aussies were pretty tired, being in a time zone 19 hours behind the one we were used to, so feeling and looking a bit tired was only to be expected.

4. After this came a customer panel, hosted by CA Tech's Adam Elster, entitled "Masters of the Modern Software Factory."

This panel had four speakers, including one from our own Telstra, as follows:

CA Technologies CEO, Mike Gregoire, spoke to the global group of media and analyst attendees in a group Q&A session, with many interesting questions asked including some from me regarding his future challenges, the name of CA's AI efforts and more.

CA Technologies then offered media from the APJ region some time with Gregoire, to ask questions specific to the region and to get extra time with him that is only possible with a smaller group in a smaller setting, as you'll see in the video below.

I missed the first part of the presentation but captured the other 90%, this was a presentation for global media and analysts explaining the CA Technologies product portfolio for 2017.

A great showcase of some of the key presentations and stands on display on the show floor at CA World '17.

An interesting interiew with Keiran on the various CA Technologies on offer, in an effectively indentical style to all my other video interviews, and as always, well worth watching!

Otto Berkes took the time to answer questions from the Asia Pacific and Japan media, which natually includes Australia, and hence why I am here!

Now came time for Ayman Sayed to sit down with us all and answer our questions and enjoy an interesting discussion amongst us all.

I already spoke Agile Management to some degree with Ken Martin above, but naturally it's great to get another perspective on how it's all going at CA, which is, as you'll see, exactly what happened.

Time to meet another Australian, Tass Melissinos, based in Melbourne, who spoke to us about API Management at CA Technologies, and naturally, plenty more!

No surprise to see TS Lim talk about security as the VP of Security in the APJ region, but as one of the most criticial parts of any business today, and as a very important part of one of the world's largest business tech and software companies, how CA Technolgoies approaches security will naturally be of interest, so please take a look and see for yourself.

As a reminder, the CA World 2017 article that precedes this one is entitled "CA World 17 opening keynote: the importance of creativity in finding 'pivot' moments," which is about CA Technologies CEO Mike Gregoire's opening keynote, and then his discussion with filmmaker and extreme sports climber, Jimmy Chin.

Then there's my closing article, which follows this one you're reading now, entitled: "CA World '17: If your business doesn't have a 'Modern Software Factory,' will it survive?", which is a wrap of the CA World 17 event and all of the most important announcements, along with some of my own thoughts and observations.

The writer attended CA World '17 as a guest of CA Technologies.

More in this category: « APIs are the key to integration CA World '17: If your business doesn't have a 'Modern Software Factory,' will it survive? »
back to top