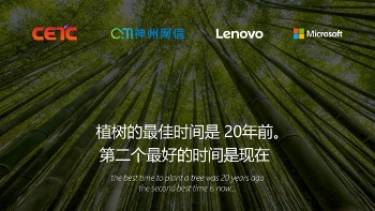 Microsoft has released what it calls Windows 10 China Government Edition, a version of the operating system that has been vetted by the Beijing authorities and deemed suitable for use by the country's public sector.

The company appears to have made major concessions to China in the development of the system, giving Beijing the ability to remove features like OneDrive, manage all telemetry and updates and also to allow the government to use its own encryption algorithms within its systems.

A statement from Terry Myerson, executive vice-president of Microsoft's Windows and Devices Group, said that PC maker Lenovo would be one of the first OEMs to install and sell the operating system on its wares.

The customer version of Windows 10 was announced in March and had to undergo testing before it was certified for public use.

The operating system was developed by a company known as C&M Information Technologies, a joint venture between the state-owned China Electronics Technology Group and Microsoft.

Myerson adopted what can only be described as a humble tone in his statement, praising the Chinese government for having the "highest standards for security".

"For more than two decades, Microsoft has had the distinct honour to work in China, learning and advancing technology together. Over the last two years, we have earnestly co-operated with the Chinese government on the security review of Windows 10," Myerson wrote.

Disclosures of blanket US spying by the ex-NSA contractor Edward Snowden in 2013 led to Beijing removing Microsoft's newer products from government procurement lists.

An anti-trust probe into Microsoft's China dealings is still being pursued by China's State Administration for Industry and Commerce.

Windows 10 has only a 9% share of PCs in China, according to figures from Baidu in February. Globally, Windows 10 had about 25% at the same time, data from Net Applications showed.

More in this category: « Unlicensed software use costs Aussie companies $65K in damages API management in the real world »
back to top