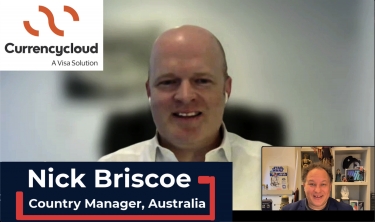 GUEST INTERVIEW: A silver lining is just the start of Currencycloud's features and benefits, with its acquisition by financial giant Visa in December 2021 and the receipt of a financial licence to operate in Australia showcasing it is blue skies ahead for this innovative company.

Currencycloud. The company is simplifying business in a multi-currency world and gives businesses the capability to move money across borders, and transact globally in multiple currencies, fast.

Experts at what they do, Currencycloud's technology makes it easy for clients to embrace digital wallets, manage multiple currencies simultaneously and to embed finance into the core of their business – no matter what industry they’re in, anywhere in the world.

Clients can simply plug in, and they’re off – knowing that Currencycloud has taken on all the complexity of multi-currency cross-border business on their behalf, helping clients to be bolder, to innovate faster, to go further and even to go first.

Currencycloud also makes it easier for entrepreneurs to launch new financial services. The company lends a hand to traditional banks who want to innovate, with Currencycloud's technology behind the scenes of today’s biggest digital challengers. Currencycloud also helps fintechs to scale faster and more efficiently.

In business since 2012, Currencycloud has processed well over US $100 billion to over 180 countries, working with banks, financial institutions and Fintechs around the world, including Starling Bank, Revolut, Atlantic Partners and Aspire.

Based in London with offices in New York, Amsterdam, Cardiff, Singapore and now Sydney, Currencycloud works with partners including Dwolla, GPS and Mambu to deliver simple, clear cross-border infrastructure solutions for clients. The company is regulated in the UK, Canada, US, the EU and Australia, and was acquired by Visa in December 2021.

As Currencycloud explains, it has grown beyond being a start-up, to being able to provide financial infrastructure and enterprise-class solutions anywhere in the world to any business that wants to move money across borders. What was once a simple FX tool has evolved into a platform and is currently a full-scale Software-as-a-Service solution for companies that want to boldly lead the way in financial innovation.

So, to learn more about Currencycloud, and its recent move to Australia, we spoke with the company's new Country Manager for Australia, Nick Briscoe. That interview is embedded immediately below, after which is a summary of the topics we spoke about, so please watch, and read on!

So, to learn more about Currencycloud and its move into Australia, please watch the video interview with Nick Briscoe above!