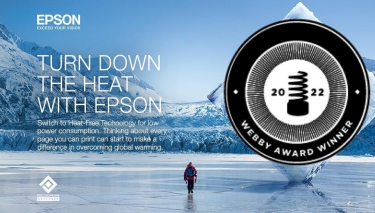 Hailed as the “Internet’s highest honour” by The New York Times, The Webby Awards, presented by the International Academy of Digital Arts and Sciences (IADAS), is the leading international awards organisation honouring excellence on the Internet.

The Awards will be broadcast on Monday May 16 at 9pm ET (US time), which you can watch live here.

Epson Australia GM of marketing, Bruce Bealby, said, “Epson Australia and New Zealand are delighted to be part of this campaign. This partnership has been a fantastic opportunity to raise the awareness of Epson’s Heat-Free technology and the energy efficiency of our inkjet printers compared to energy-hungry laser alternatives.”

Epson and National Geographic have set the standard for innovation and creativity on the Internet,” said Claire Graves, Executive Director of The Webby Awards. “This award is a testament to the skill, ingenuity, and vision of its creators.”

Epson and National Geographic will be honoured at the 26th Annual Webby Awards in New York City on May 16th, hosted by Roy Wood Jr. (The Daily Show with Trevor Noah, Roy Wood Jr.: Imperfect Messenger). Fans can follow and watch show highlights including hallmark 5-Word Speeches from the night’s big winners on May 16th at #Webbys on Instagram and Twitter, and the show at webbyawards.com.

Back in May 2021, Epson and Nat Geo launched the campaign in Australia, and iTWire was there to capture the event in an article titled: "FULL LAUNCH VIDEO: Epson and Nat Geo 'Turn Down the Heat' to save the world's permafrost."

That full launch video is here:

More in this category: « Tech In Gov 2022 in Canberra - a video journey, part 1 Apple updates macOS Monterey, Big Sur and Catalina »
Share News tips for the iTWire Journalists? Your tip will be anonymous