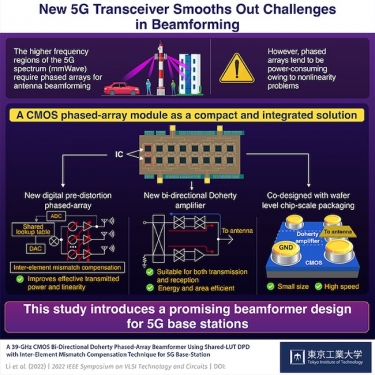 The design is said to overcome issues in conventional designs, producing energy and area efficiency and can outperform other 5G transceivers.

NEC says the Doherty amplifier, developed in 1936, has seen a resurgence in modern telecommunication devices owing to its good power efficiency and suitability for signals with a high peak-to-average ratio (such as 5G signals).

Tokyo Tech researchers modified the conventional Doherty amplifier design and produced a bi-directional amplifier: the same circuit can both amplify a signal to be transmitted and a received signal with low noise.

This fulfilled the crucial role of amplification for both transmission and reception. "Our proposed bidirectional implementation for the amplifier is very area-efficient. Additionally, thanks to its co-design with a wafer-level chip-scale packaging technology, it enables low insertion loss. This means that less power is lost as the signal traverses the amplifier," explains Tokyo Tech professor Kenichi Okada who leads the research team.

Despite its several advantages, however, the Doherty amplifier can exacerbate nonlinearity problems that arise from mismatches in the elements of the phased-array antenna.

The team addressed this problem in two ways. First, they employed the DPD technique, which involves distorting the signal before transmission to cancel out the distortion introduced by the amplifier. Their implementation, unlike the conventional DPD approaches, used a shared look-up table (LUT) for all antennas, minimising the complexity of the circuit.

"We compared the proposed device with other state-of-the-art 5G phased-array transceivers and found that, by compensating the inter-element mismatches in the shared-LUT DPD module, ours demonstrate a lower adjacent channel leakage and transmission error," remarks professor Okada. "Hopefully, the device and techniques described in this study will let us all reap the benefits of 5G NR sooner."

This first appeared in the subscription newsletter CommsWire on 16 June 2022.

BACK TO HOME PAGE
Published in Business IT

More in this category: « Workato report: automation widely used in finance, procurement, insight, and analytics Qualcomm and Renault see potential in software-connected vehicles »
Share News tips for the iTWire Journalists? Your tip will be anonymous