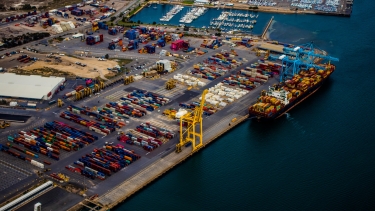 Container port company Tianjin Port Group and Chinese multinational corporation Huawei are collaborating to build a digital twin of the Port of Tianjin to make it more automated and intelligent, both companies announced.

Part of the new solution is combining 5G and L4 autonomous driving technologies, powering the Section C Terminal in the Beijiang Port Area of the Port of Tianjin, which has been stably operating over since it entered commercial operations in October 2021.

Container cranes operate automatically and intelligent robots of the horizontal transportation system frequently come and go. Remotely controlled quay cranes lift loaded containers from cargo ships and are transferred onto the intelligent robots to be transported.

Supported by the BeiDou Navigation Satellite System, these robots are guided to automatic locking/unlocking stations to unlock containers and then to the container yard along optimal driving routes that are calculated in real time.

According to Yang, the terminal’s 5G and L4 have provided a model for upgrading and transforming existing traditional container terminals worldwide.

"These innovations being used at the Port of Tianjin are having a huge impact on the port industry, creating new value for ports by improving operating environments, driving green and low-carbon development, and increasing operational efficiency. We believe that these practices will promote the intelligent development of the global port industry," said Yang.

“Section C Terminal of the Port of Tianjin has now been operating stably for over one year. This proves that 5G and L4 autonomous driving have already been successfully adopted by industries in China, and are creating true commercial and social value,” said Huawei chief technology officer smart road waterway and port BU Yue Kun.

As a major modern port, the Port of Tianjin boasts 300,000-ton-class terminals with a channel depth of 22 metres. It has 213 berths of various types.

In 2022, its container throughput exceeded 21 million TEUs, ranking among the top 10 ports worldwide.

More in this category: « Isocell HP2 makes pictures clearer in premium Samsung smartphones How Paessler safeguards HammondCare’s IT infrastructure »
Share News tips for the iTWire Journalists? Your tip will be anonymous