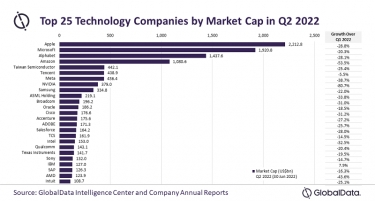 The ongoing geopolitical situation and rising inflationary pressure have put a dent on the technology sector with 24 of the top 25 technology companies—the likes of Meta, Apple, Amazon, Microsoft, Google, Nvidia, and Taiwan Semiconductor—reporting a combined loss of US$3.3 trillion ($4.3 trillion) in their market capitalisation in Q2 2022, according to analytics company GlobalData.

“Surging inflationary pressures and a hike in interest rates by the Federal Reserve resulted in a broad selloff in technology stocks in Q2,” stated GlobalData business fundamentals analyst Ragupathy Jayaraman.

However, within the next two quarters, the company’s valuation dropped to US$2.2 trillion ($3.1 trillion), due to Fed rate hikes, increasing inflationary pressures, weakening consumer confidence, and global supply chain challenges.

Microsoft’s valuation dropped by $390.5 billion in Q2 compared to Q1, although the company is expected to bounce back to its previous quarter levels due to its full-year results this month, GlobalData forecasts.

“Besides the impact of the Fed’s decision to increase interest rates to counter rising inflation, Meta’s stocks were also affected by Apple’s recently released changes to iOS and its Safari browser that limited Meta’s ads monetisation capability. The company lost more than 50% of its valuation in H1 2022,” Jayaraman said.

Soaring inflationary pressures and interest rate hikes continued to impact the company’s stocks, and the possibility of an impending recession also hurt its shareholders’ sentiments.

Semiconductor companies Nvidia and Taiwan Semiconductor also reported over a US$100 billion ($143 billion) decline in their market cap in Q2.

The decline is attributed to the global shortage of chips, supply-chain constraints, and the continuous decline in demand for GPUs.

Despite losing a US$100 billion valuation in the current quarter, Taiwan Semiconductor’s stocks are expected to soar by 50% in the long term.

An enhanced focus on cloud and AI streams allowed IBM to be the only company in the top 25 that reported a gain in valuation in Q2 vs Q1.

This first appeared in the subscription newsletter CommsWire on 26 July 2022.
Read 992 times