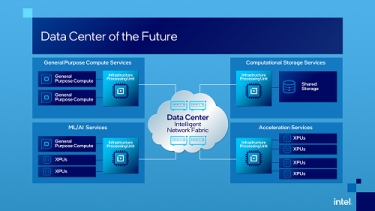 Intel’s IPU is a programmable networking device designed to maximise processor efficiency in data centres. Intel says that with the solution, customers will be able to balance processing and storage.

At the Six Five Summit 2021, Intel announced its plan for the infrastructure processing unit, which Intel defines as a programmable networking device designed to enable cloud and communication service providers to reduce overhead and free up performance for central processing units (CPUs).

With an IPU, Intel claims, customers will better utilise resources with a secure, programmable, stable solution that enables them to balance processing and storage.

Guido Appenzeller, Intel chief technology officer, data platforms group, says: “The IPU is a new category of technologies and is one of the strategic pillars of our cloud strategy. It expands upon our SmartNIC capabilities and is designed to address the complexity and inefficiencies in the modern data centre.”

Intel explains how IPU works. The IPU is a programmable network device that intelligently manages system-level infrastructure resources by accelerating those functions in a data centre.

Intel adds that it allows cloud operators to shift to a fully virtualised storage and network architecture while maintaining high performance and predictability, as well as a high degree of control.

Intel claims the IPU has dedicated functionality to accelerate modern applications that are built using a microservice-based architecture in the data centre. Intel cites research from Google and Facebook that shows 22% to 80% of CPU cycles can be consumed by microservices communication overhead.

With the IPU, a cloud provider can manage infrastructure functions while enabling its customer to control the functions of the CPU and system memory. The features of an IPU include:

Free up CPU cores by shifting storage and network virtualisation functions that were previously done in software on the CPU to the IPU.

"As a result of Intel’s collaboration with a majority of hyperscalers, Intel is already the volume leader in the IPU market with our Xeon-D, FPGA and Ethernet components,” claims Patty Kummrow, Intel vice president, data platforms group and Ethernet Products Group general manager. “The first of Intel’s FPGA-based IPU platforms are deployed at multiple cloud service providers and our first Asic IPU is under test.”

Andrew Putnam, Microsoft principal hardware engineering manager, says: “Since before 2015, Microsoft pioneered the use of reconfigurable SmartNICs across multiple Intel server generations to offload and accelerate networking and storage stacks through services like Azure Accelerated Networking.”

He adds: “The SmartNIC enables us to free up processing cores, scale to much higher bandwidths and storage IOPS, add new capabilities after deployment, and provide predictable performance to our cloud customers. Intel has been our trusted partner since the beginning, and we are pleased to see Intel continue to promote a strong industry vision for the data centre of the future with the infrastructure processing unit.”

Intel will roll out additional FPGA-based IPU platforms and dedicated Asics. These solutions will be enabled by a software foundation that allows customers to build cloud orchestration software.

According to Intel, evolving data centres will require a new intelligent architecture where large-scale distributed heterogeneous compute systems work together and is connected seamlessly to appear as a single compute platform.

This intelligent data centre architecture will have three categories of compute—CPU for general-purpose compute, XPU for application-specific or workload-specific acceleration, and IPU for infrastructure acceleration—that will be connected through programmable networks to efficiently utilize data centre resources.

More in this category: « The world's five largest Internet companies see 60% increase in employees over past year How businesses of all sizes can leverage automation »
Share News tips for the iTWire Journalists? Your tip will be anonymous