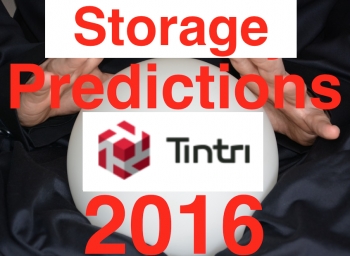 Virtual machine aware storage company Tintri has released its security predictions for 2016 for ANZ, while separately has something new coming 10 December.

As noted in another predictions article, ’tis clearly the season for getting 2016 predictions out early, even through there’s still one twelfth of 2015 yet to go.

This last twelfth of the year is filled with elfs helping to create the silly season, but when it comes to 2016 predictions from a range of companies, they’ve all been very serious!

Before we go further, I noticed Tintri’s website notifying that it has a product launch scheduled for December 2015, with a webinar where you can learn about ‘new VM-level predictive analytics and the specific questions it will answer for you,’ which is promised to be a ‘literal look into the future,’ as well as ‘a few more announcements’ that Tintri doesn’t want to spill the beans on yet until 10 December 2015 arrives. More details here.

So, what 2016 predictions do we have from Tintri A/NZ MD, Graham Schultz?

1. There will be blood – 2016 will be marked by consolidation and storage startups exiting the market

The Dell/EMC acquisition is merely the starting point. Other large, established storage companies will most certainly feel the pressure this year, which will lead them to either make acquisitions or go private.

As for the next gen storage vendors, given the billions invested in storage startups, the companies with less than a few hundred million in funding won’t be able to scale fast enough to survive.

In ANZ, small storage startups will still continue to have little to no presence and that is not expected to change in the near future.

2. Some of the shine around hyperconverged will wear off

The hype around hyperconverged ramped up in 2015, as some vendors blurred the lines between hyperconverged and web-sale. In 2016, more people will realise that companies such as Google, Facebook, and Amazon, which have been building web-scale infrastructures, have set-ups that don’t remotely resemble hyperconverged.

As more virtualised enterprises realise the limitations of hyperconverged and establish a need to scale server and storage separately, they will instead gravitate more towards converged solutions.

Hyperconverged hasn’t gained as much traction in ANZ as it has in some other global markets. Enterprises here are adopting a wait and see approach for the time being.

3. DevOps takes a seat at the storage table

The Software, Test and Development teams had limited roles in storage decision-making in the past, but in 2016 they take a seat at the table. The pressure to speed development cycles means DevOps requirements are factored into storage purchases—they will need to be quickly scaled and simply managed—on-premise or via cloud.

DevOps does not rank high on the agenda among enterprises in ANZ as it does in some other markets. As such, there is less of a push to develop very specific functions to cater for it. There are many advantages for DevOpps however organisations here are not sophisticated enough to take advantage of more automation.

Most organisations have 6-to-12 month planning cycles for their storage requirements, but rely on spreadsheets plus good ol’ pen and paper to work through future planning.

In 2016, organisations will use better tools to mine gold from historical capacity, performance and throughput data and precisely model their future needs.

This will help them make better decisions about how, where and when to procure the right storage set-up as we’re finding that many organisations dislike their current storage management tools.

5. The private cloud like we’ve never seen it before

Private cloud is nothing new, but in 2016 we expect to see a greater mixture of new applications (cloud native applications) developed on OpenStack, containers, APIs and fabric.

Companies that pursued public cloud in 2015, but ran into unexpected costs, application re-writes or security concerns, will take a fresh look at private cloud in 2016.

In ANZ, we anticipate that private cloud will continue to make bigger inroads into the corporates. However, there is a major skills shortage in ANZ that directly limits the effect and rate of adoption towards the cloud and this needs to be overcome in order for cloud adoption to accelerate to the levels that we’re seeing in markets like the US and Europe.