The need for network speed – NVMe to the rescue 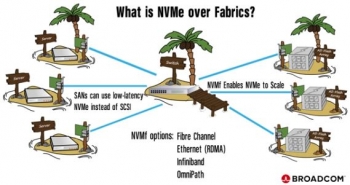 Network speed is not just about faster ethernet IP switches and bigger communication pipes but about every potential bottleneck including often overlooked storage devices and storage network fabrics.

As businesses continue their digital transformation they end up throwing huge new applications and data onto what were only ever designed as internal networks. The networks become saturated leading to increases in delay sensitive applications, slow delivery of high-definition video, slow mobile computing and applications that need breakthrough performance. The network has become the bottleneck in today’s storage infrastructure.

One of the solutions has been to implement new solid-state storage devices (SSD) - many orders of magnitude faster than traditional hard drives – but all that does is move the bottleneck to the transport it runs across.

Frequent commentator Phillip Coates, systems engineering manager, Australia and New Zealand for Brocade has written a background to the storage network. The remainder of the article is in Coates' own words.

With insufficient network bandwidth to keep up with the wide scale technology advancements in server-side compute and solid-state storage, the infrastructure bottleneck has now shifted to legacy storage networks. No longer can older generation Fibre Channel or Ethernet transports keep up with the new demands for performance within the data centre.

The good news is that flash-based storage is evolving rapidly and getting much faster. The speed of flash is critical to accelerating application performance and throughput.

Flash is more than raw performance – it is being deployed in high capacity storage arrays supporting low latency applications in a shared data environment. As these devices become more mainstream, they’ll become an integral component in traditional storage area networks.

To deliver the speed of these new flash devices, non-volatile memory express (NVMe) is emerging as a new storage protocol that will drive massive performance gains. This protocol was built explicitly for flash and designed to improve data and latency sensitive applications. It replaces the ageing SCSI driver used with hard disk drives for decades, providing about a tenfold decrease in latency and is ideally suited to an SSD environment.

Although NVMe typically serves in a direct server attached storage today, there’s a growing need to extend this low latency protocol over storage fabrics, where shared storage solutions can benefit. In addition, it promises to increase scaling to as many as 1,000 shared storage devices.

Despite all the performance and capacity gains at the device level, for optimal results and to take full advantage of this investment, you still need a network that is as fast as the infrastructure. This is critical to avoid flash becoming the restricting element in today’s data centre. Building a modern storage network for flash will unlock the full capabilities of the all-flash data centre and prepare IT leaders for a future of insanely fast and reliable applications.

NVMe over Fibre Channel is the future

Most businesses today need to perform ultra-fast data transfers across large-scale networks for business-critical applications. NVMe over Fabrics is a new industry standard announced last year that dramatically reduces latency and eliminates the need for SCSI translation, by directly transferring NVMe commands and structures across an existing network. This makes applications run faster or scale better.

Owing to its nature, NVMe can run across a variety of fabrics, including Fibre Channel and Ethernet. NVMe over Fibre Channel (FC-NVMe) works with flash storage to ensure you get the performance and low latency that you originally wanted, but it also provides the additional reliability and performance of a Fibre Channel network.

In this way, running NVMe natively across a Fibre Channel network extends the benefits of flash storage, maintains flash simplicity and efficiency, while eliminating the need for translation. That means you can enjoy higher application performance, more data storage, better analytics and more personalisation of information.

Brocade has just released a paper on nVME over Fibre channel here.

More in this category: « Nimble goes multi-cloud with Nimble Cloud Volumes Pure Storage goes all-NVMe with FlashArray//X »
back to top