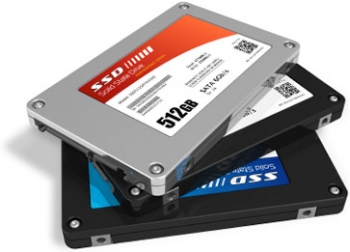 As solid state drives (SSD) get cheaper, the adoption rate in computers in 2016 will climb to over 30%.

Trendforce DRAMeXchange  has reported that MLC-based (multi-level cell) SSDs and TLC-based (triple level cell) SSDs had declined in price by 10-12% and 7-12% respectively. The reduction is due to NAND Flash memory suppliers being pressured to keep cutting prices as the industry experiences a large increase in overall capacity.

Based on DRAMeXchange’s analysis, the price difference between 128GB SSDs and 500GB HDDs will shrink to less than US$3 in 2016. The price difference between 256GB SSDs and 1TB HDDs will be less than US$7. While SSD remains costlier per GB, the market seems to be prepared to pay for the speed over capacity – which in most cases is never used. And reliability statistics show SSDs seldom suffer drive failure or total data loss, so the total cost of ownership is lower.

DRAMeXchange believes this year’s SSD adoption rate in the notebook market will exceed 30%.

Samsung continues to dominate the market due to its price advantage with TLC-based SSDs using 3D-NAND Flash. Currently, only Samsung mass produced SSDs with 3D-NAND Flash.

As a consequence, total ODM notebook shipments fell by 1% to 42.6 million units. Though NAND Flash memory suppliers took a more conservative approach to their sales during the same period, most Chinese SSD makers expanded their product shipments to capture market share. The struggle between the two forces resulted in 4~5% quarterly growth in SSD shipments in the worldwide retail market. The SSD adoption rate in the notebook market in the fourth quarter was about 25-26%. Taking retail SSD sales into account, the total Client-SSD shipments for the fourth quarter of 2015 reached 22.6 million units.

Trendforce shows what has happened, but it really portends what will happen.

Samsung was the early adopter of 3D-NAND and is now reaping the benefits with higher capacity, in smaller footprints and comparatively lower production costs.

Chinese memory makers are still producing first generation MLC and second generation TLC that have higher chip counts, higher material costs, and larger footprints. Flash makers, faced with lowering demand and an oversupplied market will drop prices even more and it won’t be too long before the sweet spot 256-512GB SSDs using older technology flash are the same price as spinning hard disks – the former are much easier to make too.

By the end of the year, I predict that SSD will well exceed the 30% notebook penetration and that a combination of SSD and HDDs will be found in the higher level desktops and data centres – although the day of the all-flash data centre is not too far away.

More in this category: « WD brings helium drives to consumer space Acronis: New versions of its business backup solutions have landed »
Share News tips for the iTWire Journalists? Your tip will be anonymous