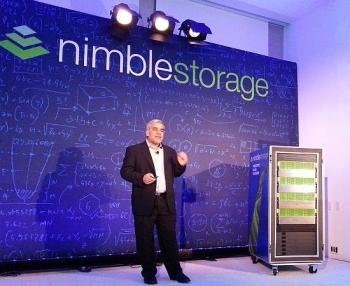 Nimble Storage has announced a new range of all flash storage arrays to complement its existing adaptive flash arrays.

The company also claims the total cost of ownership of the AF series is up to 33 to 66% lower than competing products from other vendors.

This is the result of several factors. The AF controller requires one tenth to one thirtieth as much memory than competing products, so at the entry level a single controller is cheaper, and then as the array is expanded fewer controllers are needed to support large amounts of storage.

AF arrays also support 3D V-NAND as used in the Samsung PM863 Series SSDs, with endurance management and integrated hot sparing that extends flash lifespan to seven years while providing 20% more usable capacity in half the footprint and cost of competing eMLC-based all flash arrays.

Vasudevan said Nimble had chosen to stay with SSDs rather than adopting a proprietary flash technology because the latter would provide no cost advantage. The company packs two SSDs into the space of one 3.5in drive, and handles endurance management in the file system.

Since Nimble's adaptive flash arrays run the same release of NimbleOS as the new all-flash arrays, they can be used to provide backup, disaster recovery and archiving at lower cost while maintaining a single architecture. The cost is sufficiently low that customers can afford to retain several months worth of data, Leary said.

Adaptive flash and all-flash arrays can be assembled into a single cluster, so the most demanding workloads can be assigned to all-flash. Applications can be moved from one to the other without downtime.

The top of the range AF9000 delivers up to 350,000 IOPS with sub-millisecond latency and scales to more than 2PB effective capacity in 12U.

Up to four arrays can be clustered for up to 1.2M IOPS and effective capacity of more than 8PB, said to an order of magnitude greater than competitive all flash arrays. Such clusters can be managed as a single unit.

Storage can be added, controllers upgraded and arrays clustered without disrupting normal operation.

"Substantial changes" were made in the development of the AF series, vice president of engineering Varun Mehta told iTWire. Adaptive flash used flash storage as a caching layer, but that is not needed in an all-flash array.

But the biggest change comes from the introduction of inline deduplication, he said. Data is initially written to NVRAM to deliver the required performance, and from there a 'fingerprint' is generated to determine whether or not an identical block has already been stored.

The problem is that the fingerprint table can become very large, so Nimble allows it to spill from memory into flash storage. "That's good and bad," he said. The good thing is that it allows Nimble to support more storage at lower cost, as a controller with a given amount of memory can keep track of more data blocks and hence more SSDs.

The bad is that retrieving table entries from flash takes longer. So Nimble has developed a new algorithm to predict which entries are likely to be needed and bring them back into memory ahead of time, thus providing sustained write performance.

Matching the compression block size to the application's block size results in greater efficiency, but "it's not commonly done" because it is easier to use a fixed block size such as 512 bytes or 4KB, Mehta said.

Nimble's software lets users tell the array which application will use a particular volume, and it sets the block size accordingly and applies specific optimisations. For example, Windows system partitions use 4K blocks, while Exchange 2012 uses 32K blocks. Users can manually set the compression block size if the application is unknown to the Nimble software.

While compression is more efficient with larger blocks, a mismatch between the size of application writes and compression block sizes reduces overall efficiency.

Reliability and availability have been an important part of Nimble's pitch from the outset. The company has achieved 99.9997% uptime across all its customers, equivalent to eight seconds of downtime per system per month.

As with previous Nimble arrays, the AF series protects against the simultaneous failure of three SSDs. The new 'Triple+' parity scheme takes account of the different failure characteristics of SSDs compared with spinning disks. A complete failure equivalent to a hard drive crash is "exceedingly rare" with SSD, Mehta told iTWire. A more likely cause of failure is that certain cells wear out before others, and intra-drive parity helps protect against this problem by providing four rather than three places to recover data before turning to snapshots or replicated copies, he said.

Nimble's analytics (see below) help prevent multiple simultaneous drive failures by recommending early replacement of some drives, otherwise the efficient wear-levelling mechanism could make that situation more likely. But some customers like to run their systems into the ground before replacing any parts, so Triple+ parity reduces the risk that such practices could result in lost data, Mehta said.

An important feature of Nimble's platform is the InfoSight cloud analytics system that collects more data points every four hours than there are stars in the Milky Way. By pooling infrastructure data from many customers the company is able to prevent issues from arising by alerting customers of the need to take particular actions (nine out of ten issues are detected by Nimble before the customer notices), perform rapid root-cause analysis across the technology stack, and predict future requirements to simplify planning.

Data from non-Nimble elements is collected using standard APIs such as those provided by VMware's vCenter, vice president of customer support Rod Bagg told iTWire. Support for additional hypervisors such as Microsoft Hyper-V is planned, along with data collection from Windows and other operating systems. "We have a roadmap for that sort of thing," he said.

InfoSight is included with all Nimble support contracts, and can be used by as many people as the customer requires.

The new AF arrays can be ordered immediately.

"Our engineers are so confident in the readiness of our all flash arrays that we've been powering core Nimble production engineering infrastructure services on an AF7000 array for several weeks and have experienced flawless service," said vice president of product management Ajay Singh.

Disclosure: The writer travelled to San Francisco as a guest of Nimble Storage.

More in this category: « 2TB/7mm thick – the world's slimmest, fastest and biggest mobile hard drive Nimble puts data science to work for customers »
Share News tips for the iTWire Journalists? Your tip will be anonymous