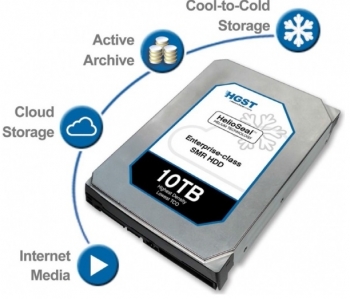 In the never ending quest to fit more into the same space HGST have released a 10TB helium filled hard disk drive aimed at the OEM storage market and data centres.

iTWire has previously written about the helium technology and this is the third of HGST’s helium-based HDDs launched in less than two years. It underscores the sustainability, applicability, and success of its HelioSeal technology with well over one million units deployed to date.

The HA10 uses ‘shingling technology’ - by overlapping the data tracks on top of each other, higher areal density can be achieved within the same physical footprint. However it is not a drop in replacement for standard enterprise hard disks.

HGST is providing an Open Source Software Development Kit (SDK) known as “libzbc” to facilitate Linux application development and implementation of new SMR command sets. Access to the SDK can be found here. .

“We are in the era of data explosion, which has brought huge challenges to massive data management with increasing data storage costs and demand for instant access to all data,” said Yuan Yuan, vice president of Huawei IT Storage Product Line. “Huawei is pleased to see the launch of HGST Ultrastar Archive Ha10 with 10TB single drive capacity and its application in Huawei’s OceanStor storage system. Huawei will continue cooperating with its partners in innovative technology development and applications so as to help customers tackle various challenges posed by massive data management.”

More in this category: « VMAX3 separates data services from hardware Fujitsu claims storage lead with Eternus DX »
Share News tips for the iTWire Journalists? Your tip will be anonymous