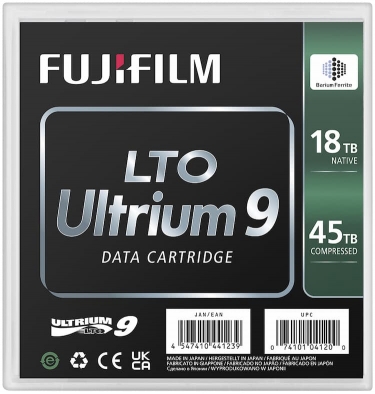 The high capacity of Fujifilm's standards-compliant LTO-9 data cartridge makes it suitable for backing up and archiving large-capacity data, with the added advantage of Fujifilm’s proprietary technology giving a compressed capacity of up to 45TB.

The new tape supports data transfers at up to 1,000MBps, or 400MBps for non-compressed data, with low error rates.

Magnetic tapes are said to be attracting renewed attention as they provide long-term storage of large-capacity data safely at low cost and with 95% less CO2 emissions compared with hard drives, largely as they only consume power while being actively used.

Cold data – data that has been stored for a long time without being used – is thought to represent more than 80% of all data, providing a big opportunity for tape storage.

The ease of storing tapes offline helps minimise the risk of damage or loss during cyber attacks, and LTO-9 tapes are available in rewritable and WORM form.

More in this category: « MediaHub Australia: Solution uses HPE tech for real-time access to content for broadcasters Pure Storage reveals storage-as-code and database-as-a-service products »
Share News tips for the iTWire Journalists? Your tip will be anonymous