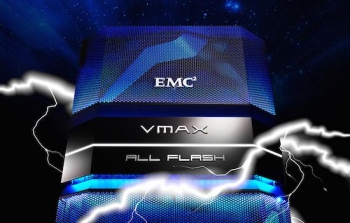 Storage vendor EMC has decided flash is now the technology of choice for primary storage, and its future products will only use disk for bulk and archive storage.

EMC's commitment to an all-flash future for primary storage was made alongside its announcement of two new all-flash storage products joining the existing XtremIO all-flash arrays.

Vmax All Flash is said to be the first all-flash array with native support for block, file, open systems and mainframe use with scalability to 4PB.

Two models are available initially, the Vmax 450 and Vmax 850, both designed around EMC's V-Brick architecture. Each V-Brick starts with one controller and 53TB of storage, scalable to 500TB in 13TB increments.

The Vmax 450 can accommodate one to four V-Bricks, while the 850 scales to eight.

Depending on the configuration, Vmax All Flash can deliver millions of IOPS with less than 500 microsecond latency and up to 150GBps of bandwidth.

EMC is following the lead of some of its younger competitors such as Nimble (which revealed its all-flash array last week) by introducing flat-price maintenance (avoiding the traditional hikes in maintenance fees after the first few years) and by offering lifetime flash endurance protection.

Previously, the highest performing flash storage was delivered on PCIe cards, but they had the major disadvantage of being accessible only by the server in which they were installed.

DSSD D5 gets around this by providing ultra-dense, high-performance, highly available and very low latency shared flash storage for up to 48 servers. PCIe Gen3 connections are used to obtain a combination of latency as low as 100 microseconds, throughput up to 100GBps, and up to 10 million IOPS from a 5U system containing up to 100TB of usable storage.

Applications are said to include Hadoop-based systems, high performance databases and data warehouses, and others that involve complex, real-time processing.

According to EMC, DSSD D5 can provide one-third the latency, occupy one-fifth the rack space, and provide a 68% lower total cost of ownership than Oracle's highest published performance system.

"Today, we're bringing a hardened, tested platform to market, changing the face of flash as we know it and rounding out EMC's already-robust flash portfolio.

"DSSD is a blazing fast, high-performance solution and customers are in for a magnitude improvement in what's now possible for demanding applications in this new era of Rack-Scale Flash."

Even before these new products were announced, EMC held a 39% share of the all-flash market which was more than the next three competitors combined, according to IDC figures.

"With the introduction of VMAX All Flash and DSSD D5 there is virtually no data centre use case we're unable to address from traditional high-end enterprise workloads, to use cases that people haven't even dreamt about in the data centre of tomorrow."

EMC predicts that only flash storage will be used for production applications by 2020, with disk being relegated to bulk and archive storage.

More in this category: « Storage can be flash – and not boring Telstra customers get 200GB free OneDrive »
Share News tips for the iTWire Journalists? Your tip will be anonymous