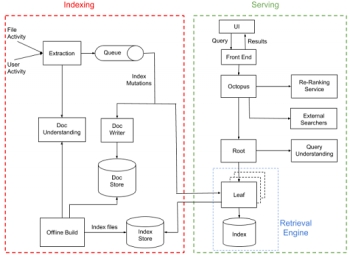 Cloud storage provider Dropbox has announced its new full-text search engine, Nautilus, which will provide personalised search across the massive scale of its operations.

The new search engine replaces the previous system, Firefly, which was optimised for speed, aiming to have 95% of all searches take less than 250 milliseconds, over hundreds of billions of pieces of content.

Nautilus continues to tackle the Dropbox challenges of scalability and reliability but has the increased goals of providing a foundation for implementing intelligent document ranking and retrieval features.

By this, Dropbox intends for the search experience to be personalised across the entire user base of more than 500 million users, each of whom has a different set of preferences and behaviours in how they search.

Dropbox says it wants to help users find the most relevant documents at that point in time for a given query, in the most efficient way possible. This necessitates machine learning is built into the pipeline, from content-specific machine learning — such as image recognition — to learning systems that rank search results in a manner consistent with the user's distinct preferences.

The Nautilus pipeline consists of two mostly independent subsystems, indexing and serving, which together span several geographically-distributed Dropbox data centres running tens of thousands of processes on over a thousand physical hosts.

Dropbox says its internal testing has already shown significant improvements to the time-to-index new and updated content, and with this solid foundation in place it is now building new features and working like image, video and audio file search.

It says it will make a further announcement in October on Nautilus' progress.