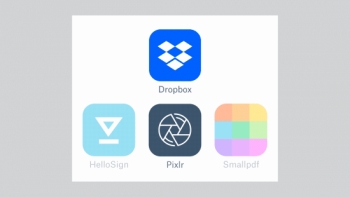 While Dropbox currently enjoys integrations with many applications, Dropbox Extensions takes it much further, providing an entirely new generation of partnership.

These workflows relate to customers signing, viewing, annotating and drawing on documents – repeatable workflows, performed by a lot of customers every day, and which currently take time and multiple steps to complete, Iversen explained.

The difference Dropbox Extensions offers is “the speed and fluency in which you can complete tasks. Maybe it took 10 steps to sign a confidentiality agreement – you have it in Dropbox, go into your signature solution, open the Dropbox document, process it … instead, with Dropbox Extensions you click the file in Dropbox, click Sign and it opens in your selected application. The workflow comes to you,” Iversen said.

“The average knowledge worker spends 60% of their time on work around work,” Iversen said. To tackle this, Dropbox developed its new functionality “focusing on trying to reduce friction and wasted time, particularly with collaboration".

"We want to empower people to choose the best tools for their work by removing the friction between them," said Quentin Clark, senior vice-president of Engineering, Product, and Design at Dropbox. "So we’re making it seamless for users to connect with partners that offer the right tools for the task at hand.”

As a result of deep partner integrations with companies including Adobe, Autodesk, DocuSign, Vimeo, airSlate, HelloSign, Nitro, Pixlr, and Smallpdf, users will have the ability to move easily from one task to the next. From within Dropbox, users will have the option to start content-based workflows such as:

“An open ecosystem is the future of work,” Iversen said. “Our responsibility is to help best-of-breed apps connect to get work done," Clark said.

More in this category: « Dell EMC releases software for protection against cyber attacks Acronis delivers new version of Acronis Data Cloud to Australia and NZ »
back to top