Seagate’s new 10TB range – not a lot of hot air

One of the most important aspects of Seagate’s new BarraCuda, IronWolf and SkyHawk 10TB range is that they all use Helium technology, previously the domain of high-end enterprise drives.

Helium drives are sealed – they last longer, run cooler, use 20-30% less power, allow for more accurate head/track placement, and for up to seven platters in a 3.5” form factor. The only issue is that helium technology is more expensive than air-based drives.

Seagate has brought this technology to the masses. BarraCuda is for “compute”, IronWolf is for NAS, and Skyhawk is for video surveillance use. Each category will also have a “Pro” version featuring longer MTBF, higher workload rates, and longer warranties. Either version is impressive. 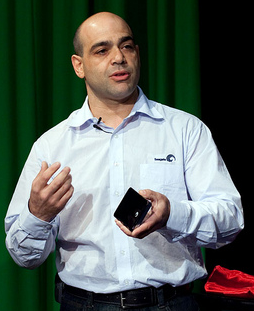 He explained that each drive might look similar on the outside, but the firmware and components were very different on the inside. “For example, video surveillance drives are designed for continuous, high-speed writing — up to 90% of their life — and will be slower on playback. Pro drives extend the workload.

A standard BarraCuda has 55TB/Yr rating and a two-year warranty, and the Pro has 300TB/Yr and a five-year warranty. “It reflects what people are using it for and how much they want to pay,” Zavagila said.

The $849 10TB BarraCuda is aimed at desktop and all-in-one devices, home servers and direct attached storage where it delivers more data faster through its intelligent multi-layer system that is built on fast DRAM, flash, and magnetic recording technologies.

Zavagila said that the key here was the number of supported HD video cameras and the ability to place these drives in less than perfect conditions – in shops, on poles, etc.

He also pointed to the explosive growth in surveillance – from 566 petabytes now, to more than 2500 by 2019. It is not only the increased use but recording at higher resolutions, frame rates and longer mandatory retention periods contributing to this.

The Skyhawk will support up to 64 HD cameras, 1 million hours MTBF, used tarnish resistant components and had a data recovery service option that not only replaced a faulty drive but where possible restored the data as well using Seagate’s recovery factory facility. 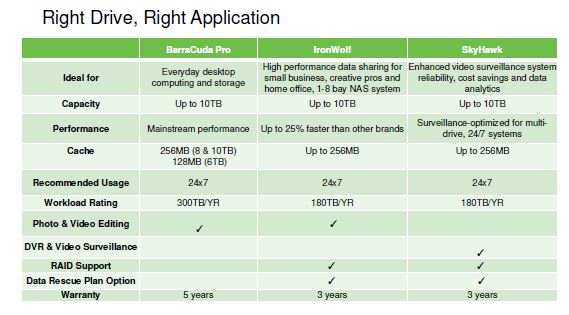 Zavagila is always a wealth of information. His overview left me with one overwhelming impression – you pay for what you get.

People who stick cheap drives into a NAS will get a fraction of the performance and reliability that a NAS designed drive delivers. If you use the wrong drive for surveillance, you will not be able to support more, quality, video streams. And frankly, the BarraCuda Pro with its enormous 300TB/Yr workload (most relevant to a single drive) and five-year warranty is what I would use over a cheap desktop hard disk.

More in this category: « Dropbox beefs up business offering WD Gold 10TB HDD for data centres »
back to top