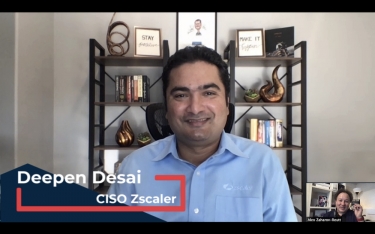 With Zscaler’s new research showing attackers turning to encrypted attacks during the pandemic, and encryption-based threats growing by 260% this year, not even healthcare was able to avoid the onslaught of SSL-based attacks - but thankfully, there are defences in active use by businesses to protect IT infrastructure, customers and users.

Zscaler. The company says “Zscaler security as a service is delivered through a purpose-built, globally distributed platform” that is “cloud from the beginning” and “built for the future”. Zscaler also promises its customers that you can “Break free from the cost of owning and maintaining security point products”, and that “Zscaler closes security gaps and moves enterprises to the cloud”.

It is also enabling “secure digital transformation”, and given the massive rise in online threats during the unprecedented year this has been, it’s no wonder that Zscaler, and other security companies out there - have been kept very busy securing their customers from ever evolving threats.

For those wondering, ThreatLabZ is the embedded global research team at Zscaler, and includes “security experts, researchers, and network engineers responsible for analysing and eliminating threats across the Zscaler security cloud and investigating the global threat landscape. The team shares its research and cloud data with the industry at large to help promote a safer internet”.

We’re told that the threat research “reveals the emerging techniques and impacted industries behind a 260% spike in attacks using encrypted channels to bypass legacy security controls” and that the report “provides guidance on how IT and security leaders can protect their enterprise from the rising trend of encrypted threats, based on insight sourced from over 6.6 billion encrypted threats across the Zscaler cloud from January through September 2020 over encrypted channels”.

The 2020 State of Encrypted Attacks report is a detailed, 20-page PDF that is free to download and read, after free registration.

Here’s my video interview with Deepen Desai, the CISO and VP of Security Research & Operations at Zscaler - more detail on the report is below, so please read on thereafter!

So, what are the headline findings from the report?

Well, showing that cybercriminals will not be dissuaded by a global health crisis, the report shows they targeted the healthcare industry the most. The research revealed the top industries under attack by SSL-based threats were:

Other key findings include:

COVID-19 is Driving a Ransomware Surge:
Zscaler researchers witnessed a 5x increase in ransomware attacks over encrypted traffic beginning in March, when the World Health Organization declared the virus a pandemic. Earlier research from Zscaler indicated a 30,000% spike in COVID-related threats, when cybercriminals first began preying on fears of the virus.

Phishing Attacks Neared 200 Million:
As one of the most commonly used attacks over SSL, phishing attempts reached more than 193 million instances during the first nine months of 2020. The manufacturing sector was the most targeted (38.6%) followed by services (13.8%), and healthcare (10.9%).

30% of SSL-Based Attacks Delivered Through Trusted Cloud Providers:
Cybercriminals continue to become more sophisticated in avoiding detection, taking advantage of the reputations of trusted cloud providers such as Dropbox, Google, Microsoft, and Amazon to deliver malware over encrypted channels.

Microsoft Remains Most Targeted Brand for SSL-Based Phishing:
Since Microsoft technology is among the most adopted in the world, Zscaler identified Microsoft as the most frequently spoofed brand for phishing attacks, which is consistent with ThreatLabZ 2019 report. Other popular brands for spoofing included PayPal and Google. Cybercriminals are also increasingly spoofing Netflix and other streaming entertainment services during the pandemic.

Deepen Desai, CISO and Vice President of Security Research at Zscaler said: “Cybercriminals are shamelessly attacking critical industries like healthcare, government and finance during the pandemic, and this research shows how risky encrypted traffic can be if not inspected.

“Attackers have significantly advanced the methods they use to deliver ransomware, for example, inside of an organisation utilising encrypted traffic. The report shows a 500% increase in ransomware attacks over SSL, and this is just one example to why SSL inspection is so important to an organisation’s defence.”

Zscaler reminds us that “Inspecting encrypted traffic is mission-critical for all organisations to protect against these attacks. A multilayered defence-in-depth strategy that fully supports SSL inspection ensures that enterprises are protected from escalating threats hiding in their encrypted traffic.

The 2020 State of Encrypted Attacks report is a detailed, 20-page PDF that is definitely worth downloading and reading for yourself!