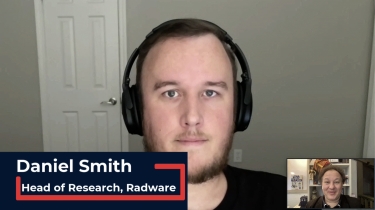 GUEST INTERVIEW: Daniel Smith is the Head of Research at Radware, and he joined me for a discussion on understanding cyber criminals, DDOS attacks, security conferences, ransomware, the pandemic, hacker groups and much more - and it's no teddy bear's picnic.

Radware. The company bills itself as an award-winning leader of cyber security and application delivery solutions for physical, cloud, and software defined data centres.

Forrester says the company knows DDoS attacks better than anyone, with Radware's Q2 DDoS attack report showing the average blocked DDoS attack volumes have increased 40% YoY, with tech, healthcare and finance the most targeted industries - among many other threat-by-threat findings.

In business since 1997, the company today has over 12,500 enterprise and carrier customers worldwide, and has seen the threats, the threat actors and the challenges evolve. Now, in Q3 2021, we have the added issue of this all being accelerated, along with so much else, by our pandemic-laden world, which is still affecting so many around the world, including here in Australia, where Delta is causing havoc.

Radware has a wide range of resources, from its well-stocked blog featuring articles such as "Why understating cyber criminal behaviour and tools is vital" and "How cloud native technology will impact 5G mobile networks" amongst many others, including its Hackers Almanac 2021 that is a real eye-opener.

There's even Radware's Live Threat Map that looks like a scary real-life version of the battle scene from that classic WarGames movie with Matthew Broderick, except that the only way to win is to play, because the bad guys are making their moves and we have no choice but to respond.

So, I was offered the opportunity to talk with Daniel Smith, the Head of Research for Radware's Cyber Threat Intelligence Division, and we had a fascinating discussion that is embedded immediately below, followed by a summary of what we spoke about, so please watch below - and read on!

So, to learn more about the dangerous world of cyber crime and cyber security, please watch the video interview above!

More in this category: « Microsoft silent about major flaw in Azure's Cosmos database Investigation ongoing into City of Stonnington cyberattack »
Share News tips for the iTWire Journalists? Your tip will be anonymous