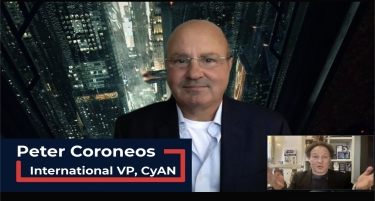 The formation of a global partnership to ensure legal protections for good faith (bona fide) zero day researchers has been enacted by the Paris-based not-for-profit Cybersecurity Advisor Network (CyAN), with such research illegal in some jurisdictions, putting modern life at serious risk. We speak to Peter Coroneos, CyAN VP, to find out more.

"They are called 'zero day' because they are either unknown to the vendor who produced the product, or are known but no patch has yet been made available.

"The period between when the zero day is first discovered by an attacker and when the patch is installed by the end user is the attack window in which a compromise can occur. The consequences can be vast and most serious attacks these days involve zero day exploits."

In the video, embedded below, Peter Coroneos opens with why the issue has come up again and the passion with which CyAN and its partners are pursuing international legal reform. The article continues thereafter, so please watch and read on!

So, why is the Zero Day Legislative Project needed?

Coroneos continued: “At a time of unprecedented scale and seriousness of cyber attacks threatening our personal information, the continuity of our businesses and the systems and infrastructure that support our societies, we find the very people we rely on to protect us remain under threat.

"'White hat’ zero day researchers form a critical piece in the remediation of exploitable connected systems. They uncover the existence of unpatched vulnerabilities and report them to vendors of the relevant products they can be fixed. Regrettably, they face legal threats from some vendors sensitive to the discovery of flaws in their products.

“The threats usually involve copyright and/or criminal laws that govern access or interference with computer systems. Outdated laws have not kept up with cyber challenges, stifling research efforts and reporting at a time when researchers should be supported.

“That is why we are building an international coalition to advocate for changes to laws to ensure that zero day researchers will no longer fear heavy handed legal responses from companies whose products they are seeking to secure," added Coroneos.

CyAN notes the OECD's recognition (PDF link) of "the need for action" in its 2021 guidance for policy makers observing:

A number of high profile cyber leaders have expressed support for the initiative:

Chris Painter, former top US cyber diplomat added: “It’s important to separate malicious actors from responsible, ethical, researchers who conduct their research within settled best practices. Supporting the latter, while condemning the former, is a worthy cause.”

“If good-faith security research is the Internet's Immune System, then modernising legislation to recognise hacking as a dual-use and morally agnostic activity, as well as creating carve-outs for today's Internet's ‘digital locksmiths’, is the equivalent of resolving the Internet's auto-immune problem.” Casey Ellis, Founder/Chairman/CTO of Bugcrowd
and Co-Founder of The disclose.io Project.

Stéphane Duguin, CEO on behalf of The CyberPeace Institute, agreed saying “Because of complexity and distributed nature of vulnerabilities, we need to empower and not penalise those who are working in good faith in the interest of public safety. Secure ICTs are key to creating a safe and stable cyberspace where we can unlock the potential of technology and empower individuals. Cybersecurity researchers are key to this mission.”

More in this category: « Macquarie Health says Windows Hive ransomware attack still having an effect LinkedIn is down - a 'configuration error' or yet another day in the hackopalypse? »
Share News tips for the iTWire Journalists? Your tip will be anonymous