Promising "50% less CPU usage", Malwarebytes' new version 4.0 for Windows PCs promises to be "smarter, faster and lighter" than ever before while dealing with modern malware and online threats.

Malwarebytes. The company bills itself as "the leading advanced endpoint protection and remediation solution", and it has launched the latest edition of its flagship premium consumer product, Malwarebytes 4.0.

The company is claiming the new version is "substantially smarter, faster and lighter", and also "comes with significant improvements enabling faster scans and detections to help catch more malware than ever before", with a "dramatic overhaul of the user experience" that makes it "more intuitive and informative".

Malwarebytes has a couple of videos available to watch, but as they are set to private on Vimeo, I can't embed them here - but you can see both at the Malwarebytes Premium page here.

So, what is Malwarebytes claiming about Katana?

We're told that its "zero-hour technology examines the behaviour of new, often polymorphic, threats, and blocks them before traditional antivirus (AV) even recognise they exist".

"These features combine to deliver the holistic defence across multiple attack vectors necessary to protect users in today’s evolving threatscape and are backed by Malwarebytes’ powerful linking technology, renowned for its ability to remove all traces of malware from an infected machine."

Akshay Bhargava, Chief Product Officer at Malwarebytes said: "Polymorphic threats have changed the game in cybersecurity. By the time traditional antivirus creates a signature for these threats it can be too late. Cybersecurity providers need to stay ahead of the game by recognising potential threats before they can cause damage.

“Malwarebytes 4.0 is designed to block these evolving threats in record time using innovative detection technology. Our new intuitive user interface helps customers more easily engage with their cybersecurity. Furthermore, the new engine is optimised and requires 50 percent less of the CPU while scanning.” 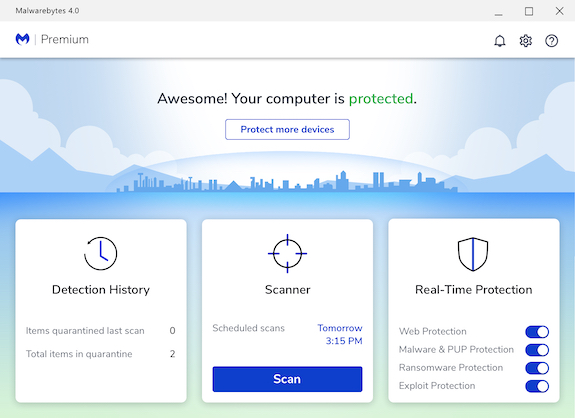 Here are the key features of Malwarebytes for Windows 4.0:

As always, Malwarebytes is available as a free download, but the free solution is reactive, relying on your to run the app to clear malware that may have made its way onto your PC.

It is also on sale for personal and business users, whereby bulk purchases mean a lower per copy price, as is the case with software in the security industry.

Buying Malwarebytes Premium turns on proactive mode, where Malwarebytes works to proactively target, prevent and remove malware that tries infecting your computer, and is especially useful for family members who have no idea what they're doing and who would otherwise call you for help when something goes wrong, but naturally is useful for anyone using a traditional computer.

For example, a single user-license for Malwarebytes Premium is A$59.99 per year, but get three copies at the same time for home use, and you pay A$87.99 per year, which is A$29.33 per device.

Given many people now have several computers at home, the discounts continue on the number of licenses you purchase, with a maximum of ten licenses for personal/home use able to be purchased at the same time, with a 10 user license costing A$185.99, meaning a price as low as A$18.60 per device.

Whether Malwarebytes or companies such as Symantec whose new 2019 Norton 360 software also comes with a range of benefits including much larger online backup inclusions and a built-in VPN condone the use of two security suites together, I personally have helped many users over the years run programs like Malwarebytes and Norton at the same time, without any noticeable performance issues, so whether you do the same is up to you.

As for the Mac, I didn't at first think that Malwarebytes 4.0 was available for it yet, as I hadn't received any update messages - but it is! 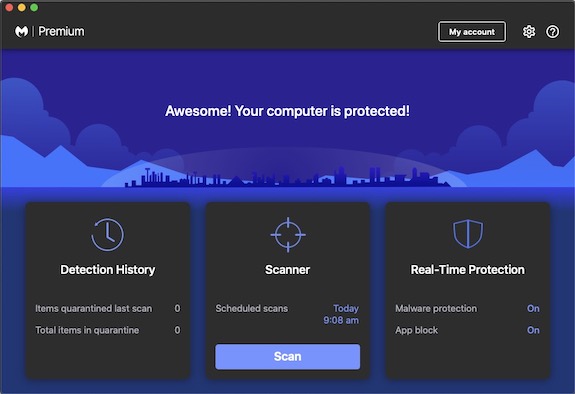 So I opened up my copy of Malwarebytes 3.9.27 on my Mac running macOS Catalina 10.15, and after clicking "Check for Updates", I was informed an update was available, which I duly downloaded and installed.

Malwarebytes wanted my to enable "Full Disk access" in the System Preferences "Security and Privacy" pane, which I did, and now I have the new Malwarebytes 4.0.27 on Mac, too.

So, if you need security, it is always worth considering a paid solution, because even though there are a number of free solutions, including Windows 10 offering its own free inbuilt security software, the reality is that paid protection from companies like Malwarebytes, Symantec and others does a much better job of proactively protecting you than free solutions can offer.

That said, if you use nothing else, at least get the free Malwarebytes version, but please consider upgrading to the paid version simply beacuse it's just that much better at protecting you proactively!

Finally, there are also versions of Malwarebytes for iOS devices, Android and Chromebooks which perform different tasks according to platform capabilities, and you can check all the versions out here.