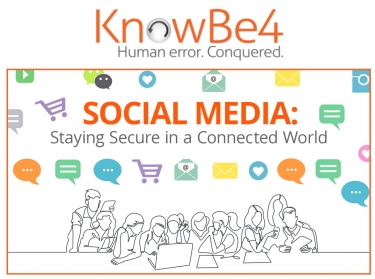 In advance of National Cyber Security Awareness Month in the US, held every year in October, KnowBe4 is offering a free social media safety course in what is also an obvious attempt to promote the fact it provides security awareness training and a simulated phishing platform.

KnowBe4. It has the clever tagline of "Human Error. Conquered", and it says this because of its claim that it is "the provider of the world’s largest security awareness training and simulated phishing platform" and "is used by more than 34,000 organisations around the globe".

We're told that "KnowBe4 helps organisations address the human element of security by raising awareness about ransomware, CEO fraud and other social engineering tactics through a new-school approach to awareness training on security", and even boasts having Kevin Mitnick on board as the company's "Chief Hacking Officer" who "helped design the KnowBe4 training based on his well-documented social engineering tactics".

Indeed, the company's blurb also states that "Tens of thousands of organisations rely on KnowBe4 to mobilise their end users as the last line of defence", and of course it is certainly true that humans are the weakest link!

The company's offerings remind of the video interview I conducted with Proofpoint's Andrew Warren-Nicholls just over a year ago in September 2019, a company that has a similar offering, where he explained why cyber security training is essential.

So, what is KnowBe4 offering in what is an obvious attempt to not only get some free publicity for itself and its courses, but to actually increase people's awareness of cybersecurity issues in an attempt to make them much street smarter when using their technology?

Well, we're told that KnowBe4 is providing a no-cost “Social Media: Staying Secure in a Connected World” course as part of its "global effort to increase online safety during National Cyber Security Awareness Month", with the course free only until October 31, 2020.

With KnowBe4's course, "participants will learn how to identify this social engineering attack vector, be provided with example scenarios showing how the bad guys do it and walk away with actionable tips for how to protect themselves and their organisations. The course is available in 34 different languages".

When you start the module, the following is listed: "The average person spends over two hours a day on social media platforms, connecting with people and organisations. This makes social media a great way for organisations to connect with current and prospective customers. However, the bad guys know this, and social media is one of their largest targets. This module will explore ways to keep yourself and your organisation safe from this very real threat."

Stu Sjouwerman, an IT security and data specialist who is also CEO and Founder of KnowBe4 said: “Social media may seem like a simple way to share information and connect with others, but people need to realise that it’s also an easy way for the bad guys to gather information to launch a social engineering attack.

“All it takes is one wrong click to allow them access to your accounts or even your devices. End users should be particularly aware of their security and privacy settings within social media platforms to ensure that they’re not sharing personal, sensitive information with the world,” Sjouwerman added.

KnowBe4 further promotes it services by stating: "With more people working from home and families depending on the internet, it is more important than ever to stay safe online and increase awareness and security practices in a different setting than they may be used to.

"Social media is often used to profile victims to set them up for social engineering scams such as phishing. According to the 2020 Verizon Data Breach Investigations Report, 70-90% of data breaches and incidents originate from phishing attacks."

You can freely access the “Social Media: Staying Secure in a Connected World” course until October 31, 2020, after which the free period will be over, so whether you're an individual or working in a large company, it's worth checking out so you're not the next social media attack victim.

National Cyber Security Awareness Month (MCSAM) is held in the US each October, with the list of 2020 Champion Organisations at the National CyberSecurity Alliance (NCSA) site, with the NCSA's home page here and the US Department of Homeland Security's NCSAM site here, with these organisations completely separate to KnowBe4.

More in this category: « Sec firm claims only way to stop ransomware is to ban ransom payments US govt agencies given deadline to patch Windows Zerologon bug »
Share News tips for the iTWire Journalists? Your tip will be anonymous