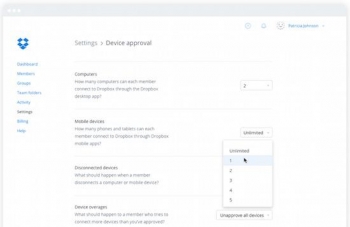 As part of its efforts to improve the administrative experience for its corporate clients, file sync and collaboration provider Dropbox has added several new features to its business and enterprise plans.

Starting today, Dropbox admins can block the use of personal Dropbox accounts in their corporate networks.

This new feature is said to be interoperable with web gateways from vendors such as Barracuda Networks, Netskope, Skyhigh Networks and Symantec.

"We integrate with all the IT systems you've got," Dropbox APAC head of solution architecture Daniel Iversen told iTWire.

Another new feature — subdomain verification — is particularly aimed at larger organisations, he said. This simplifies the task of bringing personal Dropbox accounts under corporate control, and also makes it easier to deploy Dropbox to individual parts of the organisation. For example, the various faculties within a university may have their own subdomains.

Administrators can now limit the number of devices (including computers) that one user can sync via Dropbox, and prevent syncing with unauthorised devices.

Within the next few weeks, the Dropbox Business admin console will provide the ability to analyse the audit log in a wide variety of ways to help investigate incidents.

Examples include determining what a user had done that day, and what activities affected a particular file.